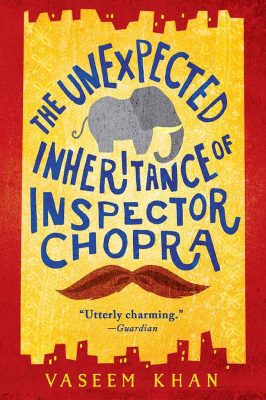 It seems a bit 1930 to use a book with so much Indian culture for the British Books Challenge. The British author of The Unexpected Inheritance of Inspector Chopra, Vaseem Khan, spent ten years of his adult life in India, inspiring the story.

The Unexpected Inheritance of Inspector Chopra wasn’t my choice for April. A friend dropped over the second book in the series for a fluffy crime story I was working on, so it just fit.

Before I tell you what the book is about, I want to tell you my favorite parts. The opening sentence, “On the day that he was due to retire, Inspector Ashwin Chopra discovered that he had inherited an elephant,” is beautiful. And the baby elephant is my favorite character.

It’s the slow-starting story of a retired police inspector in India. On his last day, he promises a low-income family that their son’s death will be investigated fully, even though he’s just a poor boy. Chopra doesn’t have jurisdiction for the investigation, from either his former employer or his wife.

I have a terrible (or useful?) habit of simplifying stories, and this one breaks down to a retired cop who can’t let go. It’s a lot more than that, including a baby elephant. His uncle sent Chopra a letter saying to expect the elephant and that it’s not an ordinary elephant. Chopra and his wife live in a high rise apartment that’s understandably not elephant-friendly. It’s such a brave and smart elephant. I’d welcome Ganesha to watch soap operas in my living room any day.

There’s a lot of stage-setting for future books: Chopra’s wife Poppy wants a child that they’ve never had, Chopra retired early due to a heart condition (I caught the first mention of that half-way in, but I may have missed it earlier). I loved the Indian feel. It has all the food and names of Mumbai with minimal explanation. I saw some on GoodReads were put off by this, but I am just thankful it wasn’t written in Indian English. It’s easy to understand but stilted compared to the flow of UK and US English. It was only later I realized it wasn’t in Indian English, the scenery is gorgeously described, and I forgot the author is English.

I’m giving the book three stars. It takes 13% of the book before the pace picks up. I’m rarely in the mood for fluffy crime and currently craving something so delicious it keeps me compelled to read more. A sleepless night page-turner.

Do you have a recommendation for the British Books Challenge for May?

Photo by Francesco Benvenuto on Unsplash