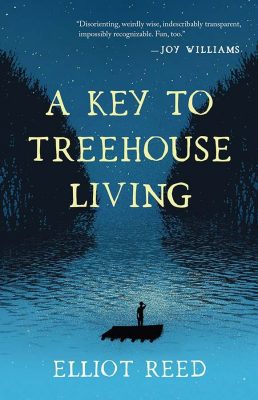 If you’re the person who reads books sporadically over several months, please don’t read A Key to Treehouse Living by Elliot Reed. You’ll lose track and miss elements and blame the book. It’s a novel, but it’s also a guide: kind of like the dictionaries William Tyce loves. And it’s too good a story to be overlooked for being difficult.

William writes a glossary of life to impart his knowledge of the world on others. It’s alphabetical and keyword based and uses William’s experiences as examples, which makes it his memoirs. Except I’m not sure William, with his innocence, would know that they are memoirs. A starts with ABSENCE when William is about ten years old and living with his uncle in America’s mid-west. It’s just the two of them in the mansion. William’s mother died when he was very small, and his father is missing. William spends a lot of time building and staying in treehouses in local parks.

Because the novel is a glossary of life, it’s not totally linear. Some things are referenced that happen later and then some words in the alphabet complete stories that happened earlier. It’s also is William’s naive telling, so you often have to make assumptions on what’s happening. Late in the alphabet (when William is about 15 or 16), he’s seduced by a lonely woman exactly twice his age. I was in giggles knowing what was coming, but William was so shocked that her kindness

came with expectations. It was a big learning for him, so he knew it had to make an entry. The entries get longer, with more complex language showing William aging. An early favorite is BEANS, JELLY for its description of Easter.

Some entries have long keywords to make the entry work, like OCCUPANTS OF HOLDING AREAS IN RURAL JAILS. Which is also a really funny entry.

William meets many people along the way. We see hints of his uncle’s gambling to try and get out of financial trouble. It doesn’t work, so he burns down the mansion for insurance money. Also doesn’t work, and we get entries about being a ward of the state. But this is where I started confusing who is who. I don’t remember who Patty is, and a later reference to El Hondero confused me. Update: while checking the spelling of El Hondero I found Patty at the start of the book.

I want A Key to Treehouse Living to be a success. However, the format is different and could intimidate.

Oh, and I realized how many of my reviews are positive. I’m picky with the books I select. See: INTENTIONAL