I received this book for free from GoodReads in exchange for an honest review. If you've read my other reviews, you'll know that if it's bad, I'll say so, regardless of how I received the book. 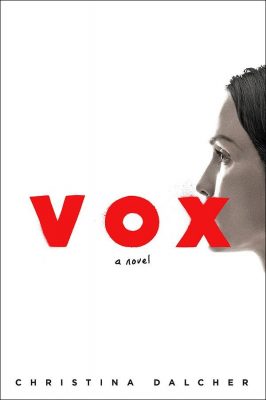 Four or five men walked in. I didn’t count them. I was looking for an escape route. They were blocking the only doorway. I discretely checked behind me; no window. OK, calm my breath. Don’t react. Keep reading.

I’m thankful so few books are books are written well-enough to confuse me into thinking it’s my life. I probably shouldn’t have read Vox by Christina Dalcher while in the coin laundry. I probably shouldn’t have read it without a dead-bolted door separating me from the rest of the world. But I did. I also suspect I wouldn’t have felt a genuine fear of men buying soda at a vending machine if I read Vox two years ago, or maybe two years in the future. That last one’s a hopeful two years.

It’s America with the Mike Pences and Brett Kavanaughs in charge. It’s the America of which we’re on the precipice.

So, what is Vox by Christina Dalcher? It’s the story of Dr Jean McClellan, a fictitious woman who is one of the world’s leading neuroscientists. Well, she was until a dictatorial president was elected who quickly restricted women’s rights to teach and return the way life should be. Because “it makes biological sense to have women do some stuff and men other stuff.” All females were removed from any occupation but married (to a male) homemaker. Passports were cancelled. Men were given control. And all females, women and girls were fitted with a counter to ensure they didn’t speak more than 100 words each day. Cameras ensured nothing was read, written or signed.

The scariest part of Vox is that Jean could be any woman. She has a teen son, twin boys, and a preschool daughter. She lives in a suburban street. Her husband works for the government.

While my life differs greatly from Jean’s, I connected to her. I felt her pain at watching her daughter refusing to communicate. Her frustration with her son’s acceptance and support of the doctrine. And her annoyance that her husband, who’s the lead science advisor to the President, for not stopping it. Any attempts would result in being sent to a camp or death.

Then the President needs her help. His brother has a brain injury; the exact kind Jean had been researching.

There’s a lot more from this point on but that’s more action, less political, and you really should read it for yourself. It’s the concept and world that’s so scary. Vox is a recent release, but its ideas are the current Vice President Mike Pence’s ideas. Women should be seen and not heard. In Vox it took less than two years to take control of the entire country. They changed the school curriculum. They barred women from working. Arrests were public and included public humiliation. It’s scary because it could happen here, and quickly.

I’m going US-centric with my comments, but it’s Australia, it’s Europe. And as Jackie, Jean’s college roommate said, “It’s gonna be a different world in a few years if we don’t do anything to change it.”