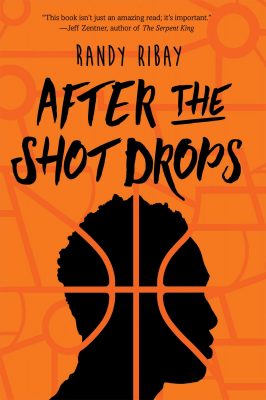 I felt physically uncomfortable reading After the Shot Drops by Randy Ribay. I was the kid who left town for a different life. I didn’t realize what or why I was doing at the time. Looking back I see the consequences of my choice, and what would have happened if I stayed. That’s why this book made me so uncomfortable. I left behind cyclical poverty and a low socio-economic culture. I had the privilege of being able to blend into a new environment. Bunny’s skin tone meant he never got that option and was forever to straddle two conflicting lives.

Bunny is the local star high school basketball champion. The local media attend his games. The local community is proud. There aren’t many success stories in the poor, African-American community, so Bunny is their hero. Unfortunately, Bunny was convinced to transfer schools to the rich, and rival, St Sebastian’s on a full scholarship. It’s a better basketball team, which will give Bunny better opportunities for college scholarships. There’s no way his parents can afford college. Transferring was hard, but Bunny knew it was the right decision.

Then there’s Nasir. He was Bunny’s best friend until Bunny transferred schools. Nasir took it hard. Why does someone like Bunny get all the support and fame when Nasir’s cousin, Wallace, is struggling to pay the rent and he’s about to be evicted along with his elderly, infirm grandmother.

After the Shot Drops alternates between Bunny and Nasir. Bunny describes the difficulty of being the only black kid in school, of feeling left out when his peers want for nothing, of replacing his teammates because he’s the better player and new school star. Nasir describes trying to help his cousin get his life together. Of Wallace’s desperate and ill-thought out plan to bet against Bunny’s team in the State Championships. Of his feelings of betrayal while missing his best friend. Of Bunny dating the girl he’s crushed on for years. Bunny feels guilt over that too.

And that’s just the start of the issues. The story is very real, thus my anxiety. As Wallace becomes more desperate, he fixates on the bets as ending his financial issues. But Bunny keeps winning, getting Wallace in more and more trouble with the illegal bookmakers. He gets Nasir to help try to find something that’ll disqualify Bunny from playing. I knew it couldn’t end well, but it was like a band-aid. Do I binge read and rip off the pain at once, or put it down so I’ll feel better but be anxious again the next day? I paced it.

After the Shot Drops has been grouped with the recent amazing real-life YA novels like The Hate U Give, but there are differences that make this less impactful, but in some ways more. After the Shot Drops gives closure, which makes it feel less real. No one gets their happily ever after in high school, and that’s what I loved about The Hate U Give—the end was a pause. Bunny is also a little too perfect. He played a flawless game, and the other players were only there to fill the court. He was the wise one.

I’m curious to read other reviews and interviews with Randy Ribay. As After the Shot Drops was released yesterday, I need to wait a little, so you should read it.

Photo by Alex Perez on Unsplash