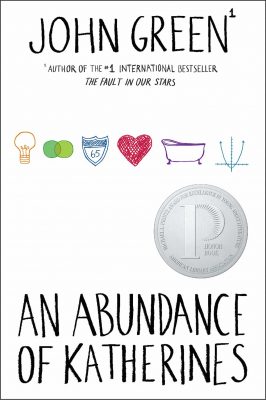 Have you ever accidentally read a book? Last week I accidentally read An Abundance of Katherines by John Green. I was fact-checking a point for a ThriftBooks post on road trip books, and before I knew it I was 11% in. Yeah, it was an ebook from the library. And it was a reread. The facts I wanted were if Colin Singleton was a genius or child prodigy (it’s child prodigy and genius wannabe) and how it was possible he could have met and dated 19 girls named Katherine before he finished high school. I didn’t get a full answer to the second question. Some relationships were fleeting (counted in minutes), with at least one repeat. I never learned the concentration of Katherines in his life. Was there a statistically high number of girls named Katherine in Chicago? It’s a big city, but still?

That’s probably the longest intro paragraph I’ve written that says practically nothing about the book. The opening line sets it well: “The morning after noted child prodigy Colin Singleton graduated from high school and got dumped by a girl named Katherine, he took a bath.”

Yeah, Colin took it hard. Katherine was the love of his life. Except it’s hard being in love with a child prodigy who’s scared he’s washed up, anagrams everything, and is looking for his Eureka moment of genius. Fortunately his college-avoiding, Lebanese-descent, Muslim best friend, Hassan came to the rescue and dragged him on a road trip. The road trip is incidental, but they end up in Gutshot, Tennessee visiting the last resting place of the Archduke Franz Ferdinand. There’s also a girl (not named Katherine), a pink house, and a crazy situation with a tampon string factory. And because it’s John Green and he writes disaster situations brilliantly, there’s a hilarious wild boar chase that ends in a beehive.

An Abundance of Katherines is a realistic coming of age story, like most of John’s books. The teen characters are always a little quirky and more eloquent than I was or most who I’ve met. I’d say it’s unrealistic except the March for Our Lives rally was two days ago, and the organizing teens have proven our country’s leaders to be rather incompetent and the teens inspiring.

The book is a cute, engaging read, as you could tell from me accidentally reading it. I was 11% in and realized I didn’t have my answers, so put it aside and finished it in the evening. It’s short. This is possibly the first John Green novel I ever read. It’s his second novel, and I checked a few from the library when I lived in San Francisco. Yeah, these is nostalgic affection. There are some things that irritated me. One was Hassan and Thunderstick—his penis. On GoodReads reviewers criticized Colin and Hassan using fug as a replacement swearword. I have to remind myself that I’m not 17 and saying that Thunderstick swings like a pendulum just doesn’t interest me. The replacement swear word, meh.

An Abundance of Katherines won’t have you bawling like The Fault in Our Stars, or show what it’s like living with anxiety and thought circles (Turtles All The Way Down), but it’s a delightful read and sweet entertainment.

Oh, I forgot that Colin is also devising a mathematical model to graph and predict romantic relationships.