I received this book for free from in exchange for an honest review. If you've read my other reviews, you'll know that if it's bad, I'll say so, regardless of how I received the book. 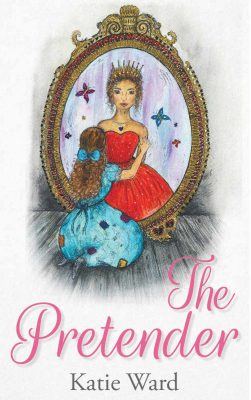 I must admit I’m loving the current trend of modernizing fairy tales. Plus, there are few who don’t dream, as children, of being royalty. While some are cute, the writing styles of old are complex and I’d hate to see stories be overlooked for being hard. That’s I’m happy about today’s blog tour. It’s The Pretender by Katie Ward. Katie has reimagined Mark Twain’s The Prince and the Pauper bringing the story into modern times. Katie stopped by the blog to answer a few questions but before we chat with her, let’s talk about The Pretender.

As I mentioned, The Pretender is modernizing the Mark Twain novel from 1881. After reading The Pretender, I tried reading the classic. All I can say is that I’m glad Katie modernized the story. Late 19th-century literature is hard to read.

So it’s now a cute story set in France. Sophia Lazarus goes to boarding school to escape her abusive and drug-addicted parents. After graduation, she’s back home and stands up o her father who kicks her out. In tears, she goes where she feels safe: the palace gates. Coincidentally, Princess Isabella, who is also Sophia’s age twin and doppelgänger, fought with her father that same evening. They meet, spontaneously switch places, and the princess is off to a swanky hotel with her credit card and no luggage. I’m assuming the story follows the original, except probably without the new romances.

The Pretender is out of my usual, but, hey, this is the year of read different. I struggled with the amount of dialogue, but I can see the story transforming to screen easily. I also read an ARC (review copy), and changes are ALWAYS made before release. Fortunately for it being an ARC, it did have the most adorable illustrations. They aren’t usually added to the text. They are really pretty and sweet, and yes, very girly. It matches the story perfectly.

Of all the fairy tales, why The Prince and the Pauper?

The Prince and the Pauper was one of my favourite stories as a child but I never liked the ending, it doesn’t make sense to me why it would end that way. So, initially I chose it to write a more satisfying ending. But when I started to do research, I realised that not that much had been done with the story. It didn’t appear to have been modernised, previous adaptations seemed to have stayed close to the Tudor era the original was set in. When I went to buy a copy, I had to order it in to the shop and it made me worry that this amazing story was going to slip into obscurity. As I began to scope a new story in my mind, weaving the main elements of the original into a new plot with new characters, I saw just how much potential this story had. Once I’d seen how well it worked as a modern-day novel, I realised how much I wanted to be the person to bring this story back to life. I wanted to be the one to share my favourite story with a whole new audience who may not even know it exists.

Do you see yourself in any of the characters?

While I was writing the book, I would have said absolutely not. They are both just made up fictional characters from my mind. However, the more I’ve read it, the more I’ve started to see that both Isabella and Sophia do have traits I relate to. For instance, Sophia has a defiance that infuriates her father. I had a very difficult time at school for the exact same reason. If the teacher challenged me on something I felt was unfair, I told them. I’ve always confidently stood up for myself and others, even when it made my life difficult. In terms of Isabella, I too have a real need for freedom and I hate to be told what to do or to feel tied down or restricted. I also have a tendency to act first, think later.

Which is your favorite scene?

My favourite scene would have to be when they switch places. This was one of my favourites to write and when I read it back, this is a chapter I look forward to reading. The reason is that despite their differing lives, they are both in the exact same place, fleeing their respective lives. So I love that when they meet, they are able to find their solution in each other. Also, it really shows Isabella’s caring side, in other parts of the book she can seem a little selfish and thoughtless. I also love the scene where Isabella finds herself in jail, that’s another of my favourites.

My favourite fairy tale would have to be Beauty and the Beast because unlike Cinderella, where she is plucked from her difficulties by a dashing Prince, it is Belle who saves the Prince. I really like a story that turns a stereotype on its head and while I also love Cinderella, it is that twist that makes The Beauty and the Beast stand out for me.

Do you have any writing habits or superstitions?

I don’t have any writing superstitions but when it comes to writing speech I act out what my characters are going to say. So, if they are having an argument, I’ll think what they want to say and then act it out (anyone listening would think I’m mad!) and then I can tell if it works or not. I’ve found that if I don’t do that, sometimes what sounds good in my mind or written on paper just sounds clumsy when you read it out loud. I find it really helpful to develop dialogue and the plot as you can take the argument in a natural direction you wouldn’t have necessarily thought of. Like an actor gets into character, I tend to do the same with each of my characters which is why it is so hard to stop once you start!

What’s next for you?

The Pretender is actually my second novel, although it is the first to be published. I have another completed novel currently called Red Roses which I will be looking to publish in the near future. Some years ago, I also had a short story called “Defying Gravity” (written and named before the Wicked song) which was published in an anthology called “Do the Write Thing” via a National Irish TV show called Seoige and O’Shea. So my next writing project is to adapt that into a full length novel. These are both original pieces of work with Red Roses being a tragedy that focuses on a sinister love triangle and Defying Gravity that tells the story of identical twins, one of whom is diagnosed with cancer. The story follows how the diagnosis affects the character’s relationship with her twin sister. I also have ideas for two more novels that I will be developing as well. So, if you like my work, there will be plenty more to come.