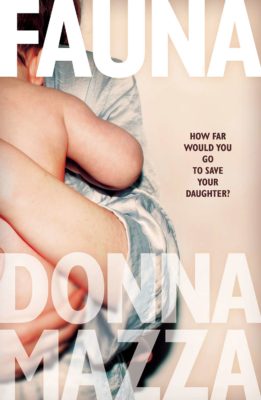 The science caught my attention. The characters dragged me in.

Fauna by Donna Mazza is the first binge book I’ve read in a while. It was a last moment contender for the Book Flood but when your 92-year-old grandma chooses to sacrifice sleep to spend time with you, plans are forgotten, so I read it later in January. However, I need to thank Allen & Unwin for getting a copy to me in time for Christmas Eve.

So what’s Fauna? It’s a powerful story of motherhood and the sacrifices a family will make to have a child. It’s also a future-set science fiction. It’s only 17 years in the future in a day very like our current, and the science could very well exist but we don’t know about it. It’s actually so similar to our now that Emmy and Jake don’t realize their new little sister is genetically more Neanderthal than their sister.

The connection between Stacey and the child drew me in as the most powerful part of Fauna. I totally missed it being set a little in the future, possibly because we know questionable genetic experimenting has already produced babies. I acknowledge it should have been the science that did it. My disinterest in becoming a parent made me question some of Stacey and her husband’s motivations early on, because I, personally, only see science as the motivator to have a DNA spliced baby to genetically bring back a Neanderthal-hybrid. Stacey and Isak did it to have a third child they could otherwise afford. Stacey’s previously studying anthropology was named as a motivator but a very overlooked one. Again, that’s probably more me than the novel.

The second half was where I related mostly with Stacey. The baby was born; they bonded. The writing was real enough for me to feel Stacey’s frustrations and fears. I imagine it being little different from any family with any family with a child with a disability. People ask questions, they’re curious and also want to help. Except when your child looks that was from a genetic experiment and your life is being controlled by a corporation with profit intent, it’s easier to avoid those questions, but Stacey found out that has a different cost.

This is the first novel I’ve reviewed with such an Australian focus. I just checked, Fauna is being released through Australia on February 4, and in the US Amazon Kindle store on the same day.

Photo by Valeria Zoncoll on Unsplash

One thought on “Book Review: Fauna and a mother’s love for her experimental baby”