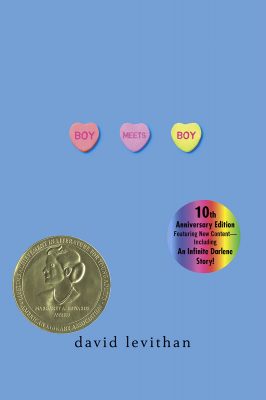 I know Joni’s brought us here because sometimes you just have to dance like a madman in the Self-Help section of your local bookstore. So we dance.

This was the first of many quotes I saved from Boy Meets Boy by David Levithan. The language used is simply beautiful. Another one is “Conversation is not his strong suit. In fact, I’m not sure it’s a suit he owns.”

Generally speaking, Boy Meets Boy is a typical YA love story. I know! I said no more romance novels. This is a special case. I was writing a piece for elsewhere and needed to add some diversity. Yes, authors, more diversity in romance novels, please. And readers, read these, so publishers know we want them. So I asked Andrew at The Pewter Wolf for recommendations, and he suggested Boy Meets Boy. So back to the story. Paul is the out, gay teen living in a utopian town. Everyone is free to be whomever they are, gay, straight, colored, trans, footballer, the lot. There’s even a trans-woman Quarterback. There are arguments and fights, but it’s linked to behaviors, not people. See, utopian. Paul has known he’s gay since he accidentally saw his kindergarten report card (the teacher declared him gay), so it’s a non-event in this story—as it should be in life.

Along comes Noah. They meet in said Self-Help section. Noah’s new to the school and it’s an instant romance. They have hiccups and hurdles, but it’s predictable, and they get their happily ever after.

Why do I adore such a formulaic story? David Levithan’s word choices are beautifully delightful. Like the examples above, they jump out while you’re reading and you’re drawn to re-reading them. At one stage I wondered if there were too many and that the book would be a collection of, essentially, one-liners but it wasn’t the case.

The other thing that I love about the story is that it’s utopian. It is equality, and as the world should be. I read the tenth-anniversary edition with extra notes and David said that was intentional—he wants to create that reality. A reality where the trans-woman Quarterback … darn, that would be a spoiler. Sorry. Read it to find out who Infinite Darlene dates at the end. It’s a little too intentionally stereotype breaking, but I like it. All the characters are well-crafted, and you feel emotions with and for them, but Infinite Darlene is my favorite. She struggles with how to be the homecoming queen AND Quarterback at the same football game because they are two different parts of her personality. Oh, and it’s not perfect. Tony is from the next town over, and his conservative Christian parents struggle with having a son who falls for boys.

Boy Meets Boy is mature. The main characters are teens, respectful teens. They are learning life and having struggles. The school is essentially an American high school, just without the Valley Girl and nastiness we see often portrayed. I don’t know how realistic it is, but it’s encouraging and enjoyable. As David said, he’s creating a new reality, and a very good one at that.