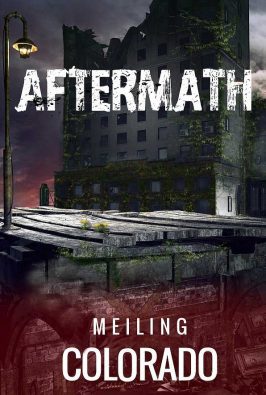 I wonder if anyone has done a study on which characters people love most in novels with multiple points of view. For me, it’s the first ones we meet. I don’t know if the author spends more time fleshing out their personality or if it’s just because they are first. It happened with Game of Thrones. It even happened with Doctor Who (late bloomer; it was Matt Smith). And with Aftermath by Meiling Colorado, it’s Ren and Lillith.

Aftermath is the story of a post-war society. Technology is a memory and communities have resettled, with little communication between them. Travel is long and difficult, and bandits attack travelers. The story begins with the arrival of a teenaged boy, who was assumed dead. He and one other took refuge from bandits in a friendly settlement. While there, a virus spread. Those who survived developed new skills, more like powers. They needed help from the healer of their home settlement.

While reading Aftermath, I didn’t know it was the start of a series, but I’m thankful it is. I lost count of how many characters we meet in Aftermath. It’s an extensive world, set over two settlements. There are so many personalities, and sub-plots, that I’m struggling to keep this review tight. Make sure you check out the interview with Meiling.

With all the characters and activity going on, Aftermath is best read in one sitting. We have romances, jealousy, power struggles, insecurities, and normal life all in together. Well, as normal as life can be in a settlement trying to re-start society, and teenagers (with a few adults) developing powers.

I think that’s also why I like Ren and Lillith best. They are a young couple who start dating during the book, but their affection pre-dates the book. Ren is a fire starter, who is out of control, and influenced by teenage hormones. There’s a hilarious scene, which I’m sure if I were Ren it would be more mortifying than amusing, where he fell asleep while traveling to the other settlement. He has a rather erotic dream about Lillith, which causes spontaneous combustion. It’s the first time anyone has known about Ren’s new “skill,” and they call for the healer, Leiren. Leiren is more the older wise woman of the settlement, and Ren is very uncomfortable when she asks what he was dreaming about to trigger such a strong reaction.

There are other, more serious, moments. An adult who developed the virus and lived, of whom not many did, became an empath. But he was so overcome feeling the combined emotions from the settlement that he becomes mentally ill and behaves more animal-like. Leiren also has her moments towards the end when she discovers ruling with domination may not be the only way and we see her vulnerabilities.

There are many more issues, which is why I’m glad Meiling is working on a sequel. This initial book has lots of foreshadowing and hints of what will come.

Meiling was kind enough to stop by the blog and answered some (but not all) of my questions about her writing processes, and the next book, and the characters. She didn’t answer my spoiler questions, but I also didn’t expect her to. Check out the interview here.

Photo by Rodion Kutsaev on Unsplash