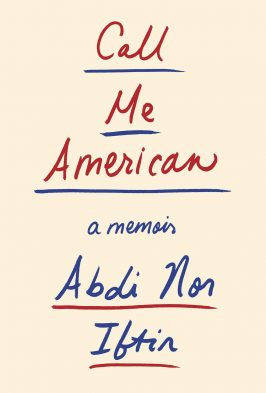 Abdi Nor Iftin and I moved to America on the same residency visa. That’s where the similarities between us end. I have written some about my coming to America story, and in Call Me American, Abdi tells his.

You may know Abdi from his citizen journalism, first while in Mogadishu, his Somalian hometown. Then, during his escape to Kenya and becoming a refugee. He recorded messages on cheap phones; sometimes while hiding in a hole, he dug in the floor of his home. That’s where he would hide from the al-Shabaab members. They would most likely kill him for refusing to join them, and they would definitely kill him if they found the phone. I thank Abdi for his bravery and for sharing his story.

I read last week that great biographies start with the parental stories, and that’s what Abdi did. He describes his parents’ meeting. Their nomadic tribes meeting up, and the negotiation for the marriage. It was 50 camels. He tells of their love for each other, and the celebrations they had in the wet season. He tells of his mother’s experience giving birth to him under a tree, surrounded by the women of the tribe, while he father wasn’t permitted to be near. It’s a matter-of-fact window into the Islamic-Believing nomadic, tribal life on Somalia.

Most of Call Me American is Abdi’s childhood, teens, and young adult life. His green card win is at the end. He had tried many other ways to leave Somalia and get to America before then but was declined. He was accepted into community college but was denied a student visa. Many of his friends joined the al-Shabaab just for the food or stayed in Nairobi being chased by the police and having to pay bribes to avoid deportation.

When Abdi was checking the Green Card Lottery results, I was comparing his experience to mine. I was in the processing year 2010, so we still had mailed results. I walked into my apartment to see a large envelope from Homeland Security on the coffee table. Abdi went back to the net café where he submitted his application and paid for time to check. I’m glad he had the electronic process. I don’t know how he would have received mail from America in Kenya. Abdi and I did the same calculating our numbers to estimate the interview date. His was 47,441. Mine was only 271 in a less competitive region. My interview was in January, and that was nerve-wracking enough. Abdi just scraped in before the cut-off. I’m a little envious that his medical was shorter, but I didn’t have to bribe police to let me on the bus to get there.

What I love about Abdi Nor and his storytelling is how sassy he is. There’s a defiant confidence that got him into trouble but also saved his life many times. There’s also a curiosity. The way he learned English from watching smuggled Hollywood movies. He then used that knowledge to earn a living, either teaching English when it was safe to do so or to dance at weddings. Again only when it was safe. He stood up to his parents’ expectations of him becoming a cleric and made his own way. There’s such an honesty and a blazé nature to it all.

It’s stories like Abdi’s that we need to hear. I don’t mind the Green Card lottery being dropped if it means more visas for refugees. If we supported refugees, then Abdi’s baby sister may not have died, and millions will not have suffered so deeply.

Photo by Benjamin Faust on Unsplash