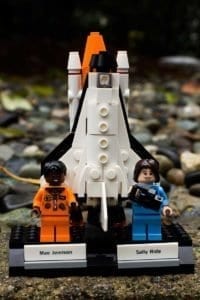 I’ve been well-behaved lately and not adding to my Lego collection. Sure it helped that the recent minifig collections are kind of boring. But, the Women of NASA set was released. *swoon*

Those who know me, know I detest calling out achievements on gender. These women are an exception. They achieved more than most of us have or will, and had to work harder to achieve that simply because they are female. Miss Six insisted on building the set for me and the look on her face when we discussed why these women had to fight to learn and work was pure shock. It never occurred to her that people could link intelligence to gender. To her, people are people.

While I want to talk about these women and why they are so amazing, this Lego set is also amazing. It was designed by fan, Maia Weinstock, with the Lego Ideas program. It’s where anyone (literally anyone) can submit a Lego set design. The community votes and the most popular go to a Lego team for assessment. My Doctor Who set came from the same program.

Who are the Women of NASA?

The Women of NASA isn’t an exhaustive collection of the women or people who have made significant space developments. But it’s a good start of celebrating geek. 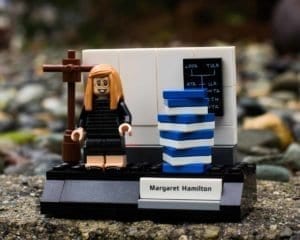 Margaret is my personal favorite. Mainly because in some ways she had to fight harder than many others and helped make things easier for us now. She graduated high school as my parents were born. Not really at a time when women could even imagine a life outside the house. She studied mathematics at MIT and Margaret is the person who first used the term software engineering. She wanted to give software more respect in the industry. Her NASA achievements included developing the onboard flight software for the Apollo missions to the moon.

In the press conference before Sally Ride became America’s first woman in space she was asked idiotic questions like “Will the flight affect your reproductive organs?” and “Do you weep when things go wrong on the job?”. I’d love to say things have changed, but astronauts are still likely to be asked stupid things. In addition to flying on Challenger twice, heading up the inquiry after the Challenger explosion, and teaching physics at US San Diego, she established Sally Ride Science creating entertaining, educational materials to teach children about space and science. Oh, and she became an astronaut after answering an ad in the student paper. 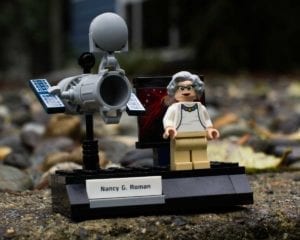 Nancy is another woman who I respect because she accomplished so much when EVERYTHING was stacked against her. She’s currently 92 years old. While with NASA she planned the Hubble telescope and was one of the first female executives, among a plethora of other achievements.

Mae was the first African-American woman in space. It’s disappointing that it took until 1992 for that to happen, but we’re glad Mae persisted in doing it. Mae originally trained as a medical doctor and after leaving NASA established a company that develops new technologies and encourages students in sciences.

Maia’s initial design included Katherine Johnson. You may know of Katherine from Hidden Figures. She was the mathematician and space scientist is best known for calculating and verifying trajectories for the Mercury and Apollo programs. She modestly declined being made into a minifig. She also didn’t understand all the positive attention she got after Hidden Figures was released, which is kind of cute.

Who should we celebrate next?