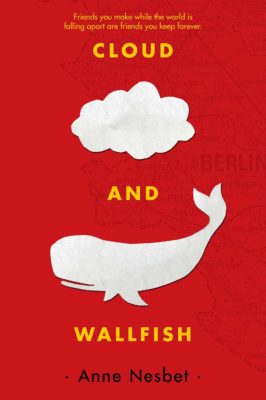 I believe you can never read too young for your age, but sometimes I would like to have a target-audience aged reader to read the book with me. Cloud and Wallfish by Anne Nesbet is one of those. I’m not even sure how it made it on my To Read list, but here we are.

I think the best summary comes from the official synopsis:

Noah Keller has a pretty normal life, until one wild afternoon when his parents pick him up from school and head straight for the airport, telling him on the ride that his name isn’t really Noah and he didn’t really just turn eleven in March. And he can’t even ask them why — not because of his Astonishing Stutter, but because asking questions is against the newly instated rules. (Rule Number Two: Don’t talk about serious things indoors, because Rule Number One: They will always be listening).

Within a few days, Noah (now Jonah) and his parents were behind the Iron Curtain in East Berlin. Noah’s mother claimed to be researching her PhD and his dad was writing a book because there’s little else to do. Except Noah is a curious kid with a photographic memory and started mentally questioning it all. Things just weren’t quite adding up. On top of that, it was hard trying to fit in to an East German school, when the authorities don’t want an American kid there and the kids mostly are too indoctrinated to be friends. Noah made one friend, Claudia, who he called Cloud. She named him Wallfish. It’s similar to the German word for whale and playing off his new name, Jonah.

As an adult I understood the significance of what was going on and the timing of being set in the 1980s, but I’d like to talk to a 10 year old to see what they think of it. While being cluey, Noah’s not the most mature kid. He suspects there’s more to his name change and giving up his life, but also goes with the flow. The story is cute and you feel for each family member as they navigate the differences between the United States and the heavily controlled East Germany. There’s an attempt to set the historical stage at the end of each chapter. It explains the historical context. To me, it was too formal and disconnected. That’s why I want to talk to a kid about Cloud and Wallfish.

Have you read Cloud and Wallfish? What did you think? Would you have preferred a pure historical fiction without the explanatory sub-chapters? Or do you think they kept a flow?

Update: I’ve joined the Book Depository affiliate program. They offer (nearly) global free shipping. I used them in the US for Australian books yet to be published there. And while I adore Dymocks and Readings in Melbourne, Book Depository has a massive range and great prices, so I’ve used them here for academic books, but they have everything. As with the other programs, there’s no difference for you and you get to support this site. All book links from now on will be pointing there, but you’re free to buy from where ever, including used and borrowing from your local library.

Photo by Annie Spratt on Unsplash