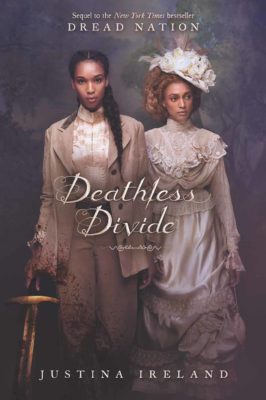 The sequel to Dread Nation is a journey of revenge and salvation across a divided America.
After the fall of Summerland, Jane McKeene hoped her life would get simpler: Get out of town, stay alive, and head west to California to find her mother.
But nothing is easy when you're a girl trained in putting down the restless dead, and a devastating loss on the road to a protected village called Nicodemus has Jane questioning everything she thought she knew about surviving in 1880's America.
What's more, this safe haven is not what it appears - as Jane discovers when she sees familiar faces from Summerland amid this new society. Caught between mysteries and lies, the undead, and her own inner demons, Jane soon finds herself on a dark path of blood and violence that threatens to consume her.
But she won't be in it alone.
Katherine Deveraux never expected to be allied with Jane McKeene. But after the hell she has endured, she knows friends are hard to come by - and that Jane needs her, too, whether Jane wants to admit it or not.
Watching Jane's back, however, is more than she bargained for, and when they both reach a breaking point, it's up to Katherine to keep hope alive - even as she begins to fear that there is no happily-ever-after for girls like her.

If this sounds familiar, it’s because Deathless Divide is the sequel of Dread Nation, Justina Ireland’s amazing civil war historical fiction that tweaks the story by adding zombies. And a civil war means lots of dead, which means lots of zombies.

For a quick re-cap (even though you SHOULD read Dread Nation if you haven’t already), we met Jane McKeene who lived as a favoured slave child to a white plantation-owning woman in Kentucky just after the American Civil War. Jane was hidden away from the Negro and Native Reeducation Act enforcement officers, so she wouldn’t be taken with the other children of colour. The girls were trained as attendants to protect the white well-to-do citizens from the zombies that had taken over the country. Jane knew her luck was going to run out, so she offered herself and was taken to Miss Preston’s School of Combat for Negro Girls. There she proved extremely competent with knives, but less competent with the politics and social order the time demanded of a woman of colour. Skipping the adventures, Dread Nation finished with Jane, another student attendant, Katherine Deveraux, Jane’s occasional beau and best friend, Jackson Keats and a ragtag group escaping on foot from a town overrun with zombie shamblers.

On to the Deathless Divide.

I have to admit (without giving spoilers), there was one stage where I wanted to give up on Deathless Divide. We had a LOT from Katherine’s point of view and I don’t like her as much as I adore Jane. I love Jane’s bullheaded force to do what’s right, regardless of convention and Katherine’s softer approach meant the story in the Katherine-only part didn’t appeal to me. This made me worried for the ending but I read the final page with a smile; it was perfect, and all were content.

OK, so I jumped to the ending before mentioning so many other excellent parts. I love that Justina included Jane and Katherine starting as worst enemies and how opposite they are in the recap from Dread Nation. It took a lot of adjustments and patience from both for their friendship to grow, but I’m glad it did. They balance each other and they needed each other. It’s a portrayal usually used in romantic relationships, so I’m glad we had it here in a friend relationship. Jane’s need for vengeance overtook her and Katherine saw that. It also made the final takedown even more unexpected but perfect. And that’s not a spoiler. All stories have a villain and the villain is always taken down.

I’m always curious about representation in novels, especially historical ones. Because society had strict rules on what did and didn’t exist, LGBTI+ representation rarely exists in historical novels because we pretended that element of humans didn’t exist. I suppose in a novel where the black girls win, I shouldn’t be surprised by Jane and Callie’s relationship being normalised. A few fleeting characters voiced discomfort and others took the stance they were just close friends (who slept in the same bed). Jane just went with the flow. There was her occasional relationship for Jackson, an attraction to Gideon, and when Callie kissed her, Jane’s reaction was shock at being kissed, not shock at being kissed by a girl. It’s a massive thank you to Justina for bringing truth into the story with a 2020 eye, even though I’d love to know Katherine’s thoughts on the relationship.

Amusingly, I just now read Justina’s note at the end of the book. What I have said here on LGBTI+ representation, she says, quote, “Where are the Black folks?”. It’s true for novels (and history books) wiping out both and giving a particular view that suited the authors more than reflecting history.

Photo by Cayetano Gil on Unsplash