I’ve pulled this blog out of the closet, and brushed off the technological moth balls. It has a new name and a pretty new look. It’s also been a few years since the last post and a lot has happened/changed. So to celebrate and have some silly fun I decided mix a Reddit AMA with a trashy Facebook quiz to ask what my friends want to know. The questions are crowdsourced from my Facebook and Twitter friends. Siri helped with some answers.

We all know you’re a Ravenclaw, but what’s your second Hogwart’s house and why?

What’s the meaning of life? 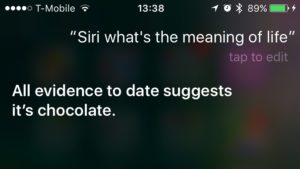 What if Harry Potter hadn’t been a wizard?

That would be horrible. The Dursley’s wouldn’t know any different and Harry would have been trapped under the stairs until he was old enough to be put on the streets.

Why did the chicken cross the road? 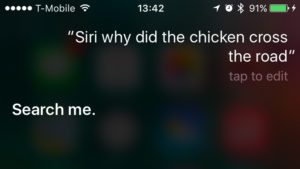 What was first, the chicken or the egg? 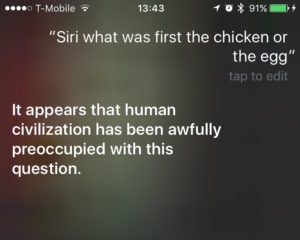 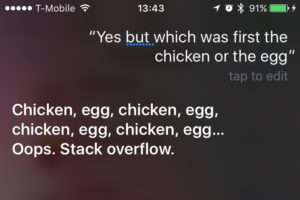 Or the Ravenclaw response: a circle has no beginning.

Why shouldn’t you touch a butterfly’s wings?

Are we still having to deal with consent issues? Come on, it’s 2017!

I’m merging these next two together:

What is the best way to filter out fake news from your virtual world? and How would you make out fake news, reliable news and the absolute truth?

Wait, I can’t believe everything I read on Facebook? My life is a lie!

Siri, can you help with this one? 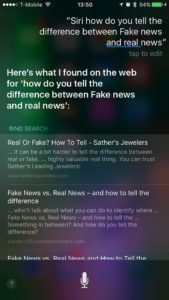 I guess not. But should we question why Siri chose to capitalize fake?

Who would you be in another life? 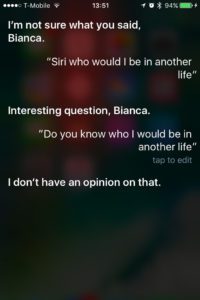 This was instantly too hard (I like my life). I threw it to Siri and she threw it straight back. Sorry. Perhaps I need more information? Which other life? Medieval? Wizarding?

How many blogs does a girl truly need?

How many blogs can a blogger blog before she blogs too much? I only have three main sites myself. Two aren’t technically blogs.

Does a coin operated boy get rusty if you put him in the bath? Oh, he’s plastic and elastic. The elastic wouldn’t cope well. There’s so much societally wrong with that song. Do you want a boy or an adult to love you? Why do we want it to be all about us? This is getting too deep. Yay, catchy tune. Oh, look, there’s a unicorn.

Why is there only shit coffee available at 3am when you need it most?

I suspect this question was asked at 3am. Fresh ground beans, water just off the boil, French Press, chop stick, and seven minutes. It’s the best you’re going to get at 3am. Sorry. Oh, and the chopstick is to whisk the coffee before letting it sit for seven minutes. Then plunge and drink.

I’m also envious of people who get caffeine buzz. I just get sleepy.

What present are you bringing when you visit me next?

More importantly, what are you bringing me when you visit me next?

Do you miss The Castle?

I saw on Twitter that you’re moving to Svalbard. Is it true?

Here’s the Tweet you’re referring to. The spider was huge AND it was in my shower. MY shower. Not the spider’s. MINE. I’ve created an idea that it’s too cold for spiders to live in Svalbard. So a perfect Bianca environment. Plus, I could finally have a pet polar bear.