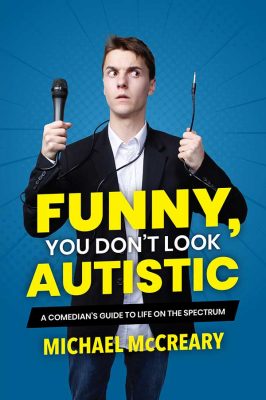 I’m not sure where to start with Funny, You Don’t Look Autistic by Michael McCreary. Wait, that sounds like it’s a bad story. Michael’s story and live is an amazing story. Maybe I should start by introducing you to Michael.

Michael McCreary is a Canadian comedian living in Toronto. He’s also autistic and an advocate for people with autism. And he’s clever-funny*.

Funny, You Don’t Look Autistic is a mix of memoirs from a young man, and amusing education. In 176 pages, Michael teaches about autism, busts a few myths, and shares his experiences growing up. It’s more a steady giggle than laugh-out-loud, and that’s perfect. I love Michael’s storytelling and his honesty. He tells about schoolyard incidents he could have dealt with better or his autism meant he misjudged situations.

I related to many of Michael’s experiences. The awkwardness of growing up and not quite knowing how to fit in. It made this book a quick read. I didn’t mean to binge it, but the writing style is easy and it flows so well. And it’s a short book. There’s a story that particularly reached me. Michael has two brothers. One is neurotypical (NT—no signs of being on the autism spectrum) and the younger is on a different part of the spectrum. Michael had trouble connecting with Matthew and avoided visiting home for the awkwardness. Matthew would demand Michael change the VHS tapes in the VCR frequently, and wake him through the night to kick him out of bed/off the couch/where ever he hadn’t been kicked out of yet. While staying an extra day after performing for a weekend-long group therapy session for autism families, someone posed a question that helped him understand Matthew better. When Matthew was demanding a tape change that was his way of trying to connect with Michael. The session moderator suggested finding a task they both enjoyed. Jumping on the trampoline became his “thing” with Matthew.

There’s one area I think Michael dealt with very well, and that’s the science and disability aspect of autism. He explains the change in definitions merging Asperger’s with autism. He also covers that the science behind autism is yet to be discovered and acknowledged correlation doesn’t equal causation. But he politely shuts down that discussion by saying this book is about him and other people already with autism, so the causes aren’t relevant to this book.

Shayanna from Annick Press offered me two books this month. Both were important stories to tell, but I knew I didn’t really have time for either. However, I chose this one for Mr 9. You’ve “met” his NT sister on here before, but his love of Lego and dislike of words means he has little interest in blogs and photography, let alone reviewing books. He’s autistic and following from Michael’s example, I have more patience and understanding for the hours he wants me there to find his Lego pieces for him.

Thank you to Michael for telling your story. And thank you for Annick Press for sharing the voices that need to be heard. Oh, and thank you for my copy of Funny, You Don’t Look Autistic.

*I just made up the term clever-funny. So many comedians make fun of other people and stereotypes which is closer to bullying than comedy. Clever-funny is entertaining storytelling.

Photo by Joao Cruz on Unsplash