On the night I landed in the United States, San Francisco was in the middle of a multi-day storm. The storm was so bad, I was the only person wanting a shuttle to a downtown hotel. The shuttle driver actually drove laps of SFO for half an hour before dumping me with another driver.

I got to the very cheap hotel in a very cheap part of town and turned on the TV. Flooding, storm, chaos. Death in Richmond. I didn’t know where Richmond was. I slept with my suitcase blocking the door.

The next morning wasn’t much better. I braved the storm to find wifi so I could search out a job and somewhere to live. On the way, a man invited me to “go with him” down an alleyway. I said no.

Wednesday was my last day in the hotel. I didn’t have a confirmed house. No leads on a job, but I did have a ticket to Wicked, the musical.

Wicked was my show with Melbourne best friend, Keira. She was the Galinda to my Elphaba. Really, those are our personalities. I sat in the theater and cried. One Fine Day started. It’s Galinda and Elphaba’s friendship song. I cried even more. I cried all through the show. What had I done? No job, no house. I left my friends behind.

Things got better. I found a house. A few months later I moved to Seattle and found a job. I met great friends in both San Francisco and Seattle.

I also discovered the internet. Or more so, people via the internet. I reunited with friends from high school. I sent a cousin a message when she was being bullied by our family. We became close, and she trusted me with the name of her then unborn daughter. Dear friends from Australia shared their secrets and dreams with me. I became closer to my friends by being further away.

A few weeks ago I stopped to collect my mail at the post office. There was a note letting me know there was a package waiting for me. I wasn’t expecting anything. 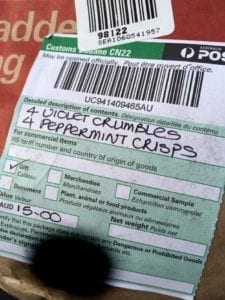 Here is the package. As he was scanning it out (all six scans), I was trying to discretely peer at the sender’s details. But without my glasses, I could see it about as well as you can from there. I know the six scans don’t really take that long, but it really felt like it. I was mentally running through who had my address: Rhi?, Ally?, Jen? From the envelope I knew it was someone in Australia.

Finally, I was handed the package and I headed to the door. I read the return address as I walked out, and recognized the writing instantly. I think I was about 14 years old the last time I saw that writing. But there was no mistake. It was my mother’s writing. Inside were eight of my favorite chocolate bars from Australia. No note. Just the chocolate bars.

There’s a reason why my family wasn’t in the list of things I left behind in Australia. I left them behind many years earlier. My mother being the first.

My family was never the most stable, but just after my 12th birthday a gunman stormed my mother’s office building and jumped to his death, landing outside her window. My mother chose to self-medicate for PTSD with alcohol and, later, drugs. She was soon asked to leave the family.

Late last year my mother found me on facebook and we started talking. It’s still a little stilted, and there are many topics we don’t discuss. The chocolate bars were a massive surprise. Very unexpected.

I’m not sure if we would be in contact if we lived in the same country. I’m not sure I would have been honored and trusted by my cousin if I remained in Australia.

From leaving Australia, I gained a family.

I wrote this speech for a Toastmasters event in 2014. I never sent it to my mother (or to the cousin mentioned). My mother’s drinking and PTSD was on the list of things we never discuss. It was also based on my memories, perception and understanding, so I never felt comfortable telling her. My mother passed away yesterday morning. I think in her last week she would have accepted my unqualified diagnosis, and possibly agreed with it, but it wasn’t relevant to mention. In our last conversation, she did say the shooting was what started the troubles.

My mother and I never gained a good relationship. Our opinions differed on nearly everything. Like me, she created her own tribe. Her tribe was there for her and supported her to the end and I am grateful for them.

Here’s to my mother: the believer of impossible things and international distributor of Violet Crumbles and Peppermint Crisps. Goodbye.