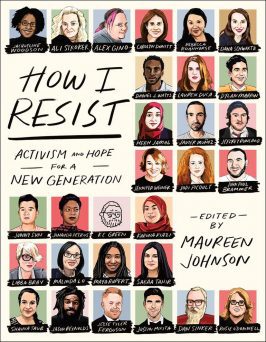 How I Resist: Activism and Hope for the Next Generation by Maureen Johnson
Published by Wednesday Books on May 15, 2018
ISBN: 1250168368
Genres: Non-Fiction
Pages: 320
Format: eARC
Source: Net Galley
Buy on Book Depository
Goodreads

I chatted with my neighbor before buying my Nevertheless, she persisted t-shirt. I live in a conservative area and wearing an Elizabeth Warren quote could alienate both me and my neighbors. My neighbor said go for it. She also pointed out that most people won’t realize what the shirt says or represents. They already think I’m a bit weird.

Wearing that shirt is one of the ways I resist. In How I Resist there are many others. The book is a collection of essays, reflections, and even a song by inspiring people and edited by bestselling YA author, Maureen Johnson with Tim Federle.

We hear from actors, and performers, and authors, and they all come across as everyday people. They all have the same concerns; concerns many have here in the United States and around the world. Sorry, nasty has gone global.

The book’s intention was to arm and inspire teens to resist the current US political situation. I’m far from being a teen, but I was inspired. I also cried. We’ve now been living under a horrible government in the US for more than a year, but that’s not the only reason to stand up for what’s right. One man tells the story of being gay (sorry, I should have noted who said what and ebooks are hard to flick back to). I cried, both moved by what he has achieved and in sorrow that he had to endure so much.

Javier Muñoz, star of Hamilton, played Alexander Hamilton the night Mike Pence attended the show. He describes what it was like knowing there was someone who detested so many cast members existence in the audience. How the cast and crew had a choice of how to resist, and they chose to put on the best show they could. They also chose to give a speech asking Mike Pence for tolerance and to uphold the values America was built on, that are in the show.

Not everyone has the opportunity or desire to resist as openly as Javier, and the cast did, and that’s the main theme of How I Resist. It’s that you can resist in many ways. Some are out and loud and marching in the streets. Some are quiet and friendly and using those friendships to build understanding and teaching different. And we need that mix. Later in the book, there’s a guide to identifying fake news and being a more discerning media consumer. There are also resources to help people find a way to stand up for what’s right. As we’ve seen with the treatment of the Florida teens speaking out on gun control, there’s a lot of backlash on teens being able or considered “eligible” to speak up. This book encourages them, and gives the resources to do it because to quote Rebecca Roanhorse in How I Resist:

Because you being you is the most powerful kind of resistance of all.

Photo by Vlad Tchompalov on Unsplash