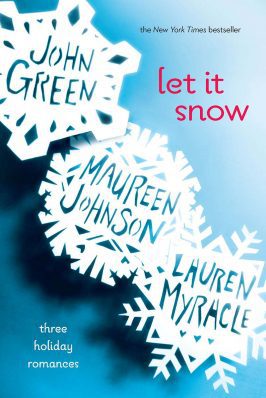 OK, yeah, so Let It Snow is technically a Christmas romance. We know I don’t care for Christmas (I don’t dislike it, just don’t see a point in it). We also know I detest romances. And it’s currently December, and I had an urge to read this. Oh, shush. I actually don’t think of Let It Snow as a Christmas romance. I see it as a great YA novel with action and adventure and human relationships that happens to be set at Christmas. I’m disappointed the movie adaptation has been delayed because I want to see the snow chase on the big screen. It will be amazing!

So to Let It Snow. It’s actually three novels, but three different YA authors. Maureen Johnson begins with The Jubilee Express. Jubilee is unfortunately named after a Christmas ornament from the Flobie Christmas Village collection, that her parents are obsessed with. So obsessed that they’re arrested after a fight at a line party to get that year’s limited new piece. That puts Jubilee on a train to her grandparents for the holidays, which hits a huge snowbank in Gracetown, which is where all three stories are set. Jubilee escapes a tribe of cheerleaders, to meet teen Stuart at an all-night Waffle House. The train isn’t leaving soon, so she accepts his invitation home. It’s a bit scary. His mother could be a Jewish cult recruiter who is obsessed with Christmas intent to marry Jubilee off to her son. Or a matchmaking mom—still intent to marry off her son.

Next, John Green takes up the pen with A Cheertastic Christmas Miracle. Yes, it includes the cheerleaders from Maureen’s story. This one’s my favorite. It has Tobin and his best friends JP and Duke (Duke’s a girl) racing through the snow to the same Waffle House for the promise of cheerleaders. Of course, the car crashes and they walk part-way with JP verbally daydreaming of the promised cheerleaders. Duke is frustrated, not just at the objectification of women, but that Tobin joins in. Tobin realizes Duke is his best friend AND a girl on the way. Romance book done.

Let It Snow ends with The Patron Saint of Pigs by Lauren Myracle. I haven’t heard of Lauren outside of Let It Snow, but her styles and my preferences don’t really match. The Patron Saint is fluffy and soppy and does include patron saints/guardian angels. It’s not as bad as some reviews make it. Addie is heartbroken and self-centered, so she’s rather annoying. She is a drama queen. She emailed Jeb to get back together, but Jeb was on Jubilee’s train (in the first story), so he was delayed meeting her, and his phone was broken. Total drama queen.

The interlaced stories work well together. Yes, Lauren’s story stands out as different, but Gracetown can’t be filled with all the same type of teenagers. Most of the characters attend school together, and it’s a small town, so they all know each other to some extent. It makes sense their lives would cross, and the authors collaborate it well. It’s JK Rowling-esqe by not spelling out the connections. Tobin, JP, and Duke arrive at the Waffle House after Jubilee and Stuart have left. Addie calls back a mysterious missed call. It’s Jubilee’s phone.

Let It Snow is a sweet story, which is probably why I like it. The authors are similar but different, oh, and it’s a quick read. This re-read took just under three hours. It was a cozy Sunday morning with coffee. And despite the influence of the book, it wasn’t Starbucks.