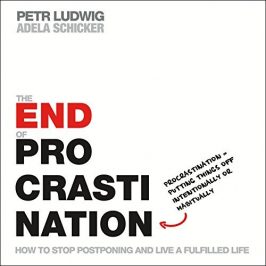 I’m sure the release for The End of Procrastination by Petr Ludwig was timed for the New Year. It is the time when people buy more gym clothes (and occasionally a membership) and declare diets fated to last maybe days. I’ve had the book on my iPad for months. No, I didn’t procrastinate. I prefer to read books closer to their release date.

You’ve probably read a bajillion books helping you be more productive. There are also studies showing that procrastination can be helpful (in some cases). Instead of a general review of this self-help book, I will talk about the tips I gained from reading The End of Procrastination. Because reading and reviewing so many books gets boring for me.

I’m sure the words confirmation bias appear nowhere in the 272 pages, but, for me, it featured heavily. It’s reassuring that many of the organization tools I use are also what Petr recommends. They’re not identical, but do the same thing to achieve the same goal.

I think we all need reminders here. How many of you set audacious New Year’s resolutions? Run a marathon? Lose 20kgs? Then fail and give up a few weeks later. Petr suggests setting the bar low and gradually working your way up. Walk a 5km race, then run one, before moving to a 10km.

Build Yourself a Business Plan

Petr doesn’t call it a business plan (rather a personal vision), but it essentially is. And put it in writing. I do SWOT analyses for clients all the time, but I’ve never done one for me. What are my motivating activities? I think I know them but I’ve never sat down for an hour to focus on these things. Great advice.

I love the templates Petr has created to help control procrastination. These are all pen and paper style reflections which work for some, but I can never do it for my To Do list (organized into today and do later tasks to make it achievable). I have daily recurring tasks, so I tried manual and use ToDoist instead. It automates sequences. He also recommends a habit list, which I also have as a recurring task. Yes, I will hit my red exercise ring on my Apple Watch each day. I will write in the gratitude section of my Best Self Journal each morning.

Hamster Analogies are a Little Weird

Petr tells the story of a hamster trapped in a box with a clear cover. The hamster quickly realizes it can’t jump out and gives up, even after the cover is removed. It’s in a discussion of learned helplessness which I get but would like to think humans are more curious than a hamster and observe differences around them, thus not accepting their fate. Or maybe I needed a human study example to accept the example. A side aspect of this (which I liked and Petr used to introduce the hamster is negativity being contagious. It’s why cable television is a success because by filtering the news you believe the world is only bad.

The referencing behind the tips could be improved. I know Petr’s not going for an academic audience so he’s trying to keep the flow going, but it didn’t work for me. I’ll never check footnotes at the end of the book or chapter, so giving more detail of who did the study and when will attribute it better and look more authentic.

But apart from that The End of Procrastination is a very useful book, either to aid your New Year’s resolution or just because productivity tips are always welcome.

Photo by Elena Loshina on Unsplash