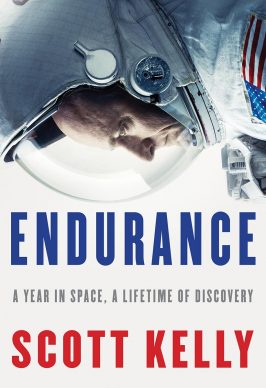 I’m not sure what to say about Endurance. But, I suppose that makes the title perfect; Endurance.

Scott Kelly is a distinguished American astronaut and one of the first two to spend a year on the International Space Station (ISS). While he definitely worked hard and took chances and sacrificed a lot to achieve his goals, there was no single big life or death moment. There was no cliffhanger. Thus the title, Endurance.

I loved reading the mundane of Scott’s time on the ISS. The complexities of fixing a toilet. Losing things because they float away. Finding chocolate floating by, and discovering it’s not chocolate. While that sounds weird and not memoirs-worthy, it’s what makes Scott’s book so good. I learned there’s an espresso machine on the ISS and that phone calls are relatively easy to make.

He mixes his time leading to a 12-month ISS stay with his experience on the station, in nearly alternating chapters. It’s brutally honest, from acknowledging how much he messed up as a kid, to bodily functions. There’s no privacy on the ISS. Discussing his wedding day elicited sympathy for his now ex-wife. I really hope she had approval rights to that inclusion. It’s one thing to regret your marriage on the wedding day; it’s another for a warts and all disclosure in your memoirs.

A weird thing came up while reading Endurance. I’m not sure if it’s an astronaut thing. I’m also slowly making my way through Chris Hadfield’s space memoirs in audiobook. Both astronauts have the same speech patterns. I read a physical copy of Endurance, but I read it in Chris’ voice. It could have been just me, or maybe I should check who the editors were.

From the two space memoirs, I enjoyed Endurance more. It’s entirely the structure. Chris added management lessons in and it confuses the story. Scott’s story is personal and honest, and more engaging. It’s also a lesson of how hard work makes anything happen.

Photo by NASA on Unsplash