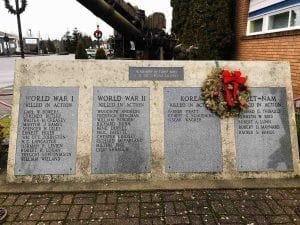 Moments ago I walked past this war memorial, and it made me wonder how much an impact that these men’s deaths had on the local community.

I’m in Blaine today. It’s a small border community. Not really much to it, except the main border crossing between Canada and the United States for the West Coast. There’s one good breakfast cafe, and it’s closed Sunday and Mondays. There’s no supermarket, but there are a liquor store and a pharmacy. It’s a farming community, and I can’t wait to buy fresh berries on the roadside in summer. The population at the last census was 4,685. Which brings me back to the memorial.

That’s 4,685 people living in this community. During World War I the population was 2,254. In 1950, it was only 1,693. From the memorial, we know that 30 local men died fighting in four wars. Compared to other cities, 30 looks like nothing, but this is Blaine. Thirty men is a significant part of the local community; the economy; the culture; the future. These were the breadwinners in a time where women were home bringing up children and running the house. Not managing larger finances or running farms. Those 30 men make up a large percentage of the local workforce. Men aged 18 to 44.

One simple statue has me wondering about the impact of these deaths. The families of these men. The wives and elderly parents now having to survive. The children not only dealing with the death of their fathers but also having to take on the responsibilities, while also learning how to be people. And that’s just the immediate households.

It’s safe to assume many of the men were the farm owners. Their employees became unemployed. Then there are their families. It’s a rock being thrown in a puddle. 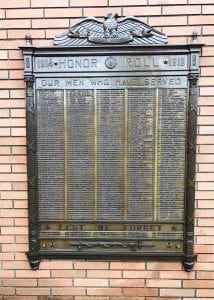 Then there are those men listed on the World War I honor roll. It’s a much larger list. They were gone for four years, not knowing if they’d return. And for those who returned how many came back with injuries? Physically and mentally. If their jobs survived the wars, could they return to them?

From 1920 to 1950 the reported Blaine population dropped by 30%. Essentially one in three people left the area, the community. From the names on the memorial, many of those were European. Schools emptied, stores closed, crops didn’t get planted, diversity disappeared. I haven’t looked at the cause, but I suspect it’s families having to move to bigger cities to find work they can do post-war. The families of the 30 men who died having to give up their community to get help from family members outside the region. Those 30 men’s deaths set off chains impacting those who possibly weren’t even born when war broke out.

It took until 1980 for the population to rise above 2,000 again. It’s growing now, but with a trigger-happy president who’s more concerned with winning and the size of his red button than saving lives, will it last? A president who has no understanding of an everyday person, let alone rural farm workers. In a way, it’s unfortunately fortunate that weapon technology has developed and there’s less of a need for boots on the ground. Fewer people need be pulled from local communities. However, this time the war’s all nuclear. The blueberry farms will be poisoned. The people killed in their homes. The deaths will be on our doorsteps. There’s no protecting the vulnerable. We’re all vulnerable, and for generations to come.

I don’t have answers for this. Every time we say it can’t get worse, it does. I’m not sure there is a bottom of the barrel anymore. We just have to speak up. We have to vote. We have to learn what’s happening and why. Let’s not look at the memorial outside the police station and say but that’s old. It’s our now.