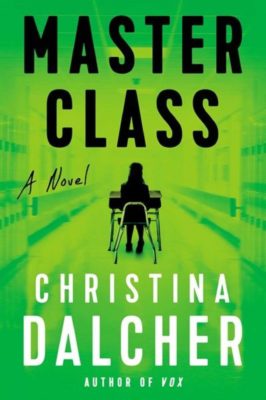 I’m thankful Master Class by Christina Dalcher is fiction. From growing up in a low-income family to parents who both dropped out of school, there’s no way I would have a Q score high enough to get a useful education, let alone into university, and have a career.

Master Class is Christina’s second novel that’s freaked me out. Thankfully, I didn’t have any scary, over-active imagination situations while reading Master Class, but it’s just as realistic and dystopian as Vox.

I’m pulling the next part directly from the synopsis:

The Q score (or quotient) is estimated before a child’s birth and in this version of current-day America, the government conducts monthly tests in school, “helping” allocate children to schools depending on the scores. High-achieving children attend the silver schools with teachers who have time to give personalised attention and all the facilities for the best education. If scores drop, then the child is moved to a green school in the next tier down. If they drop too far, children are sent to boarding schools in the country. Schools that are more similar to prisons, but for small children. And the scores continue through adulthood. People with better scores get preferred treatment in stores and have better opportunities. It’s all bad.

Now you know what Master Class is about, here are my thoughts on the novel.

Firstly, Master Class, like Vox is incredibly real. Elena and her family could be your neighbours. Frankie could be the little girl playing on your street. And, until last month, we had, in real-life America, a Secretary of Education who attempted to implement this exact system to separate the haves from the have nots. It’s that connection to real life that makes Master Class so powerful. Education has always been segregated (on more than just race), and this novel shows what happens if we take it a step further. There’s an extra level of segregation in Master Class, but that would give away some of the novel’s power, so I’m not going there.

I appreciate how Christina showed the attitudes of the privileged people in this novel. We only see Elena’s neighbourhood, and her husband masterminded this system, so there’s a lot of NIMBY. Parents in the neighbourhood feel it’s only right their children get the resources and attend silver schools. Of course, their children will never be taken… On the rare occasion a yellow bus arrives to take children to a yellow school—a boarding school, then that family is shunned, as though a low Q score is contagious. Because in a way, it is.

I have two points that aren’t criticisms, per se, more curiosities. OK, well one is a criticism, and I was just reading the Reading Group notes and saw Elena’s WWII surviving grandmother was a late addition to the novel. She’s the canary in the coal mine who sees and understands what’s happening before anyone else. But she understands because the current events perfectly repeated her wartime experience. A little too perfectly. It helped move the story along, but it’s a tad inauthentic.

The other point is the similarities to Vox. It’s definitely not Vox, but the highly educated and aware lead female character is similar and being married to a high-ranking government official who is involved in the situation are both the same. There are other little similarities but also a lot of differences. It’s only if you read them close together, or they make a huge impact on your life like with me, that it’s a problem, otherwise you probably won’t notice.

There’s an element I should have mentioned earlier, but any description would give too much away. It’s the ending. Of course I have never been in that situation, just like Christina hasn’t, but I feel it’s real. That’s all I’m saying on that.

I know Trump is out of office, but the threat of a system like in Master Class isn’t gone. As Elena’s grandmother says about not learning from history, we haven’t learnt, so PLEASE read Master Class and learn from that. I know I’m on my soapbox, but this is an excellent novel, that should give you nightmares and we can’t allow it to become our lives.

Photo by Chelsea Audibert on Unsplash