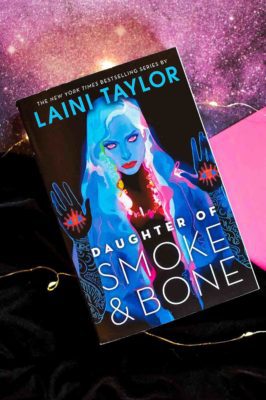 In a nation on the brink of war, a young art student's star-crossed love begins to bloom in the first book of the New York Times bestselling epic fantasy trilogy by award-winning author Laini Taylor.

Around the world, black handprints are appearing on doorways, scorched there by winged strangers who have crept through a slit in the sky.
In a dark and dusty shop, a devil's supply of human teeth grown dangerously low.
And in the tangled lanes of Prague, a young art student is about to be caught up in a brutal otherworldly war.
Meet Karou. She fills her sketchbooks with monsters that may or may not be real; she's prone to disappearing on mysterious "errands"; she speaks many languages -- not all of them human; and her bright blue hair actually grows out of her head that color. Who is she? That is the question that haunts her, and she's about to find out.
When one of the strangers -- beautiful, haunted Akiva -- fixes his fire-colored eyes on her in an alley in Marrakesh, the result is blood and starlight, secrets unveiled, and a star-crossed love whose roots drink deep of a violent past. But will Karou live to regret learning the truth about herself?

How do you know if you are the monster? That’s the question Laini Taylor explores in Daughter of Smoke and Bone.

That’s a rather subdued introduction for a book I am in love with. I know. It’s yet another Laini Taylor novel I’m swooning over. But it’s so worthy of it. I’m working through her series backwards. I stumbled on and became low-key obsessed with Strange the Dreamer and its sequel, Muse of Nightmares. It’s taken too long to get to Laini’s first major series: Daughter of Smoke and Bone. Now I want everything Laini writes to be made into a movie. Pretty please?

For those who’ve read my other reviews, Daughter of Smoke and Bone is a different book than Strange the Dreamer. It doesn’t have the beautiful language of Strange the Dreamer, but it has a unique and enthralling story. Stories of good versus bad are usually clean cut, but in Daughter of Smoke and Bone nothing is normal or expected. Human, Karou, grows up as the fostering of a chimera, and has a part-time job running errands for him collecting teeth. Just the standard side hustle for an art student in Prague, right?

That’s Karou’s normal. She’s one of the good guys; or so she thinks she’s not a monster. The portals between worlds are destroyed and she can’t get to her chimera family. She is attacked by a seraph and they each feel a draw, which leads Karou to question everything she did and knew and all she was taught.

This is the start of a trilogy. It was the first available when I hit the online libraries for a book flood read and I regret having reserved other books because it means I can’t binge all three. But don’t let hold you back. Daughter of Smoke and Bone is imaginative and something I wish I encountered earlier. Go read it and the rest of the series. Just don’t share spoilers.

Photo by JR Harris on Unsplash