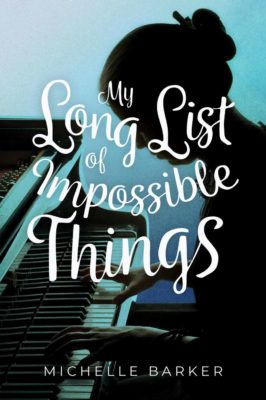 A brilliant historical YA that asks: how do you choose between survival and doing the right thing?
The arrival of the Soviet army in Germany at the end of World War II sends sixteen-year-old Katja and her family into turmoil. The fighting has stopped, but German society is in collapse, resulting in tremendous hardship. With their father gone and few resources available to them, Katja and her sister are forced to flee their home, reassured by their mother that if they can just reach a distant friend in a town far away, things will get better. But their harrowing journey brings danger and violence, and Katja needs to summon all her strength to build a new life, just as she’s questioning everything she thought she knew about her country.
Katja’s bravery and defiance help her deal with the emotional and societal upheaval. But how can she stay true to herself and protect the people she loves when each decision has such far-reaching consequences?
Acclaimed writer Michelle Barker’s second novel explores the chaos and destruction of the Second World War from a perspective rarely examined in YA fiction—the implications of the Soviet occupation on a German population grappling with the horrors of Nazism and its aftermath.

A few weeks ago I was working on a data project for a client and encountered the details of a woman born in Germany in the final months of World War II. My first reaction was that I wanted to meet her: what fascinating stories she could tell. Imagine her experiences growing up in Germany in the shadow of the war? Apart from the obvious privacy issues stopping me, I realized I didn’t need to. I had My Long List of Impossible Things by Michelle Barker on my iPad.

There are a few differences between the woman I discovered and Katja. Katja was 16 as the war ended and the Soviet army moved in. She was secretly taught piano by a Jewish man during the war and evacuated with her mother and sister when the Soviet army took over her village. Oh, and Katja is fictitious.

My Long List of Impossible Things is Michelle’s second novel that’s so well-researched that it could be non-fiction. I found myself looking up details of wartime Berlin after The House of One Thousand Eyes. I didn’t for this (because I knew it was fiction, but the world building matches the real-life stories we know from that time.

This is getting very scattered. You have the synopsis above, so I won’t waste time on that. Instead, I’ll say what I appreciated about the novel. From the first instance, I adored Katja’s mother. Her phrasing and strength drew me to her. I used the word appreciate because there are some things in the book, which made it excellent but love is an inappropriate word. There are deaths, and a rape, and inferred prostitution. It’s all, unfortunately, normal for an early post-war situation and historically accurate, but we prefer to think armistice leads to tea parties and fun. The first death is brutal and hit me hard. It was unexpected, and I felt an affection for the character. Weirdly, more than I had for Katja, but she grew on me. I also appreciate the depth of the characters and the lies they told themselves to cope. Death affected all. The war took away the males, and no one knew if they would return. So those at home played pretend, even though they knew it was pretend.

Is this the worst review I’ve written? I feel My Long List of Impossible Things deserves better, but it’s not happening, so you’ll have to read it for yourself. Really, please read it. Partially for the historically accurate rarely told story, but also because it’s a great book.

Update: You’ve probably noticed the Book Depository as a new purchase link above. I’ve had a little falling out with Amazon and I’m slowly removing their links. I’m not sure my preferred will be Book Depository (pitch me your favorite) but they’re looking best so far for their free worldwide delivery. They’ve also had better prices and faster delivery for my text books too. But remember, it’s all about stories, so you’re library, second-hand store, and local bookstore are all great options.

Photo by Jordy Meow on Unsplash