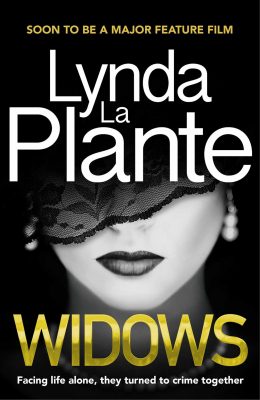 We all know I love British crime shows, and especially the Prime Suspect franchise. But Lynda La Plante is topped that with Widows. I’m a little backward getting to this. Widows was first made for television in 1983, then released as a novel two years later. There has been a movie, with another being released this year. AND the book was re-released this week.

OK, that’s long-winded. My summary is that Widows is an amazing feminist crime novel. It as the mystery and twists-and-turns. I went from being totally blindsided by a twist, to suspecting a predictable end, to getting the ending I wanted (and no, I won’t tell you what that is). But the book’s biggest strength is in the four women, the widows and one other.

The story opens with three women discovering their husbands had died in a robbery gone wrong. The women kind of knew about each other, but their husbands were professional: they kept barriers so no one would suspect they were working together. Even their wives were told cover the stories. Dolly thought her husband, Harry–the ringleader, was at a furniture conference. At the wake, Dolly was given an envelope with a key to her late husband’s bank safe deposit box, which contained all his robbery plans, and ledgers containing his career’s work. Dolly had to choose what to do with it. There was a police officer who was obsessed with bringing Harry to justice, even after Harry’s death. He wanted evidence. A rival crime cartel knew the ledgers would bring them riches and control of the city. Dolly had to decide what do do with them: hand them in, sell them? She recruited the other widows and carried on Harry’s work.

While that’s the basic synopsis, I’m looking forward to the movie. Remember this story was first broadcast in 1983. I can’t work out when it’s set, but I suspect it’s in the 1960s. All this (unfortunately even the early ‘80s) are when women were essentially still expected to be home bringing up children and thought incapable of anything different. Decades before Me Too, these women are standing up against the patriarchy and proving that women are equal to men. Remember, the original television screening was in 1983. Dolly is determined, dealing with her unexpected life after a miscarriage, and actually thriving after her husband’s death. She leads the other two widows and Bella, a stripper who became their fourth. I loved reading her reaction when visiting Bella at the strip club; seeing the men as pathetic. “Their crude innuendoes made Dolly’s stomach churn, but their drunken heckles were worse.” Dolly’s modern expectations need to be shared. I love that they all struggled with it, and learning to think differently than what was expected of them, as women. I loved seeing the women’s confidence grow, and I shared their celebration when they achieved what the men couldn’t.

On its own, Widows is a creative, engaging, and a bit scary crime thriller. Add in the women breaking stereotypes and it’s a must-read. Who is coming to the movie with me?