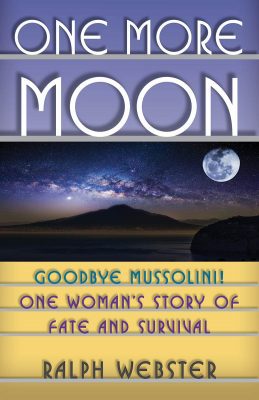 Ralph Webster’s grandparents fled from Mussolini-controlled Italy in 1941. They were German Jews, who’d spent most of their lives in Italy. They never spent time in concentration camps. They weren’t smuggled out under cover of darkness. However, One More Moon is one of the scarier stories I’ve read about the Holocaust and World War II. After you’ve read the review, don’t forget to check out the interview Ralph gave us.

For a quick summary, One More Moon is Ralph’s grandmother, Elsa telling her story from buying the Pensione Alexandria in Naples, in 1934, through arriving the United States as a refugee nearly ten years later. In the first half, we hear the challenges of going from being a woman whose class shouldn’t allow her to work, to being hands-on in the Pensione. I love the stories of the guests who stop by, often because Elsa, and her family, spoke English, Italian, and German. We hear the ups and downs and the financial stability it gave her family, albeit unconventional. Along the way, we learn the acceptance and love of the Neapolitan community, where race is irrelevant and time kind of stops. Sure it was 1934 when they took over the Pensione, but the shopping experience still seems rather rustic. Through Elsa’s voice, we also meet their guests and learn their stories.

Hover, there’s always the small undercurrent of Hitler’s rise to power. It starts with notes from Elsa’s brother still in Germany, to hearing of family members moving out of Germany. Despite it being Elsa’s heritage and life, the persecution feels remote. They were in Naples; the locals don’t persecute. That all happens elsewhere. Mussolini won’t support that, right? Gradually the war comes to Italy. That’s where One More Moon becomes scary. The story is all told in Elsa’s voice and with Elsa’s experiences. “She” reminds us at times. I assume because we readers know more than she did at the time. The scary part is now normal the persecution begins. It’s only a few people, only a few rights. It doesn’t mean anything, right? The first post-it note I added was announcing Hitler’s military changes. “He unilaterally canceled the military clauses of the Treaty of Versailles and defiantly announced he would reinstate compulsory military conscription. The army would be increased to 550,000 men. By 1937, new weapons were being manufactured day and night. Industries had been transformed, and Germany’s youth had been molded into soldiers. Unemployment problems had been solved, and the German economy was booming.”

Apologies for the long quote, but change the names and years and the same acts are being attempted in the United States today. A later quote says, “Dictators have their own reasons for choosing their words and generally have the freedom to do and say as they wish. Like many politicians, there are times we thought that Mussolini misstated the facts to support his claims.”

When Elsa and her husband moved to Rome to obtain entry visas for the United States (yes, it was all done legally, with permission), there were signs of war, but it was still rather life as normal. They couldn’t be employed by non-Jews and legally should be shunned, but they weren’t. But no one stood up for them either. That’s what I think makes this book so important. We’ve read about Anne Frank, and the boy in striped pajamas, and so many other stories set in Europe at the same time. They all have a dramatic action to them. While those stories represent a large segment of the citizens of the time, there were millions more. We hear that here. We hear how easily control was obtained. We hear Elsa’s hypotheses on Hitler’s control over Mussolini and how such as accepting country was forced to join the persecution. I’m glad Elsa has passed away and can’t see history repeating in her adopted country.

The borders were closed just weeks after Elsa left Italy. She, with her husband, was among the last Jews to leave. I don’t mean to diminish other people’s stories and experiences by saying Elsa’s is important. But it’s the normalcy of Elsa’s experience we need to read and share. It’s the start of the war that we have a possibility of recreating.

From what I can tell, Ralph documented his grandmother’s oral history. A few times Elsa’s story switches to the current day in her Portland nursing home, and in one chapter it switches to Ralph’s voice because Elsa died before completing their work. It gets a little confusing here, at the end, with Ralph, one of Elsa’s German friends, Kaethe, and Ralph’s wife Ginger taking over the story. I appreciate this and that he didn’t attempt to fictionalize Elsa’s words. I’m assuming there was some of that because at 98, essentially deaf and blind; there’s little chance it could all be verbatim. But Ralph did have his lifetime of hearing the stories to place it together.

I have two friends waiting for my copy of One More Moon, so I’m not doing my usual giveaway. Borrow it from the library or buy it though. Just read it, so we learn from history and not repeat it. I’m sorry that Elsa and her family endured war, and I’m thankful she chose to share her story.

An Interview with Ralph Webster about One More Moon

Ralph Webster was kind enough answer some questions I had about Elsa’s story and his writing. I’ve made the interview into a new post because it’s all fascinating and I didn’t want the length to scare people away. Thanks for your book, your words, and your time, Ralph.

Photo by Quentin Keller on Unsplash