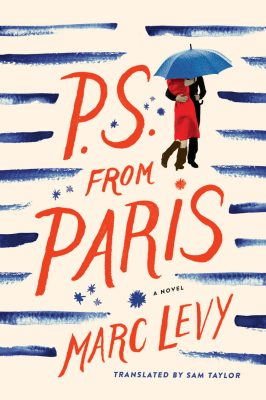 Today I discovered I am rather judgmental of books I don’t like. Things will irritate me and I’ll be unfair. I’m trying not to. PS from Paris was a Read Different* from amazon first reads. It’s an American romance set in Paris, with a gorgeous cover.

While that last sentence sums up the plot, I suppose it’s simplistically unfair. PS from Paris is the story of an American novel writer, Paul, and Mia, a movie actress from Britain. Mia runs away to her childhood best friend in Paris after being fed up with her husband’s affairs. Paul moved to Paris after his first book’s success and weirdly developed a fear of flying after the one rough flight and was unable to return to San Francisco. I’m taking the rest from the official synopsis, “When his best friend surreptitiously sets him up with Mia through a dating website, Paul and Mia’s relationship status is ‘complicated.’ Even though everything about Paris seems to be nudging them together, the two lonely ex-pats resist, concocting increasingly far-fetched strategies to stay ‘just friends.’ A feat easier said than done, as fate has other plans in store. Is true love waiting for them in a postscript?”

I pulled this from my to-read pile on an exhausted Friday night. I didn’t want anything that forced me to think, and PS from Paris complied. Even if it did prompt me to late-night Google “Availability of potato crisps in Paris.” There are some Americanisms that felt out of place for Paris. *checks the background on the author, Marc Levy* Actually, Marc is French and PS from Paris was originally published in French. That partially fits then; overeager translator? While reading it, I wondered if it should be in French or there should be some indication the characters were speaking French. Both main characters have English as their first language. Usually, the translator will leave common words in the original language to show the difference. A merci or a bonjour would have worked well.

PS from Paris is an everyday romance. There are twists and turns, but overall predictable. I’d love to read the novel set in North Korea that Paul wrote during the story. It’s a story within a story, with a twist that’s hilariously improbable. How can an author not know the highly successful Korean version of his book was actually a different story? Oops, spoiler.

I don’t choose many romances, so I’m not sure what else to say. I don’t regret the 3-4 hours spent reading PS from Paris, but it’s so far outside my preferences that I don’t know from my respected friends would enjoy it. PS from Paris is romantic fluff. There, warning complete.

Photo by Fabrizio Verrecchia on Unsplash