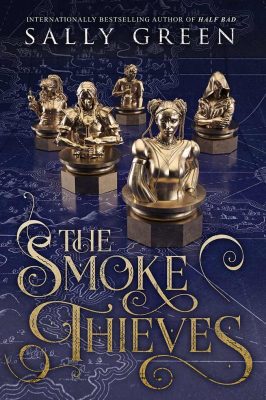 The beginning to an epic medieval fantasy trilogy, perfect for Game of Thrones fans.

A shrewd princess whose father is plotting against her. A brave soldier turned traitor. A loyal servant on a quest to avenge his family. A streetwise demon smoke hunter in desperate need of money. A charming thief with no clue about his true identity. Their lives would never intersect, until a war between kingdoms bubbles up, and the dangerous truth about demon smoke intertwines all their fates. Welcome to The Smoke Thieves, a tangled web of political intrigue, shifting alliances, and forbidden love, in a world where sometimes no amount of magic can keep you safe.

It’s a while since I last read fantasy. I don’t even recall the last title. So when I joined Penguin’s First to Read program, I grabbed The Smoke Thieves by Sally Green. As a bonus, Sally is British, so here’s the May British Book Challenge novel.

I’ve pulled the blurb into this review because it’s so different from the book. The blurb is a perfect description of how I imagine the series to be. The Smoke Thieves is only the first book, so it’s a LOT of stage setting. When you read it (I advise waiting for all the books to come out and then binge them), it will make sense. My eARC was just over 540 pages—long for a YA novel—and the action started on page 393. Until that point, I was ready to write the whole series off. Now I’m not so sure. I had to remember this isn’t Harry Potter with seven books with adventures and an overarching story. The Smoke Thieves is one huge story, chunked into volumes.

My quick overview of The Smoke Thieves is that it’s a typical fantasy novel. It’s rather predictable and not very original. It also got me thinking about how fantasy novels are commonly based in medieval times. The Smoke Thieves is more so. It’s medieval era with some demons thrown in. There’s a strong similarity between the War of Religion in France in the 1570s, but others will probably link it to the Game of Thrones Red Wedding. Spoiler: it ends differently in The Smoke Thieves.

What did I like about The Smoke Thieves? There’s some diversity. Woohoo! Edyon has a crush on March, but as of the end of the novel, it’s unrequited. I expect it will be though. The love triangle (not Edyon and March) is amusingly predictable and kind of cute.

We’ll see how I feel when the second book is released. I’m currently unsure if I want to read it.

Photo by Jaromír Kavan on Unsplash