I received this book for free from Libro.fm in exchange for an honest review. If you've read my other reviews, you'll know that if it's bad, I'll say so, regardless of how I received the book. 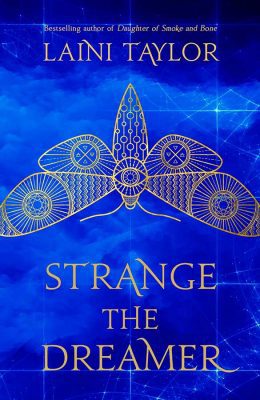 “Meh, it’s a free audiobook. I’m out of podcasts, so I’ll listen during my road trip”.

“Umm, this is pretty good”.

Then I started tweeting:

My morning: I don’t want Strange the Dreamer to end. Wait, it’s a series by @lainitaylor. Darn, there’s only one released. *clicks her blog* OMG the sequel is out in under two months!!!!!

Strange the Dreamer has emotionally broken me and I need to drive to Seattle. Darn you, audiobooks.

I have a new favorite fantasy series. It took until seeing a dinosaur in a horse transporter on I-5 (a freeway) to snap me out of the book funk. Seriously, the end was so unexpected and unwanted, and I gained such an emotional attachment to Lazlo and Sarai. It was heart-wrenching.

Spoilers aside, Strange the Dreamer by Laini Taylor is the story of Lazlo Strange: a war orphan and junior librarian with his head in the clouds. Or, more accurately, in the lost city of Weep. Lazlo has been obsessed with weep since the city’s real name was removed from his mind when he was a small child. Fast forward and a delegation from Weep arrives seeking volunteers to help them with a dire problem.

The characters and world created in Strange the Dreamer are detailed and entrancing. Maybe it was the audiobook and on a long road trip (then using wireless headphones in my apartment, then walking down the beach—it’s 19 hours of audio), but I recall it being all unique. I haven’t seen that in a fantasy novel for a very long time. And the writing and descriptions are beautiful. “There were two mysteries, actually: one old, one new. The old one opened his mind, but it was the new one that climbed inside, turned several circles, and settled in with a grunt—like a satisfied dragon in a cozy new lair. And there it would remain—the mystery, in his mind—exhaling enigma for years to come.” Also: “He drifted about with his head full of myths, always at least half lost in some otherland of story. Demons and wingsmiths, seraphim and spirits, he loved it all.”

The romance between Lazlo and Sarai was adorable in its innocence, but just when it felt the descriptions were dragging a little (they both discovered love, romance, and physical affection together), something happened. Their dream connection was broken, or Lazlo was awakened. I know that’s a little confusing, but you’ll have to read the novel to understand why they met in dreams.

I feel this review doesn’t come close to the intricacy in Strange the Dreamer. I feel I need to describe it all: the unsureness Lazlo feels being the lowly librarian how talks his way into the mission, the friendships between both the delegation and Lazlo’s fellow Zosmanians, and his hero worship of the godslayer then discovering he’s just a man. Then there are Sarai’s stories and the other god spawn in the citadel. I browsed the Goodreads reviews and found this, so it’s not just me: “This book is a tangible piece of joy.” It feels like it should be confusing to keep the characters, stories, and lands straight, but it’s not.

My new aim is to be extremely minimalist, but it’s tempting to buy a print copy of Strange the Dreamer AND Muse of Nightmares when it’s released in October. I want to live in their world.