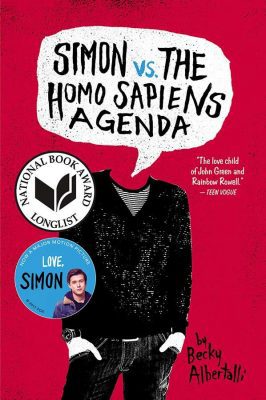 Simon vs the Homo Sapiens Agenda will forever be etched in literary history. I wish it weren’t so worthy though. Simon vs the Homo Sapiens Agenda is a cute young adult story of discovery and first love set in a high school. It is very cute. It’s a little original with Simon’s emails to Blue. What makes it so worthy is that Simon and Blue are both boys. Yes, in the 21st-century books about gay characters are still rare. Stories like this should be as common as boy meets girl by now. Alas, we still have a LONG way to go and thank you to Becky Albertelli for this story. I should also thank everyone who brought Simon to the screen with Love, Simon, the movie adaptation. It’s important to make LGBTQ+ stories mainstream for cinema too.

A quick summary of the book with the exceedingly long name: Simon is gay. He knows it. No one else does. Especially not the people at his high school. They aren’t exactly open to different, and the few kids who did come out have been teased and bullied. It’s easier to keep quiet. One night someone comes out on the unofficial school gossip Tumblr feed. Spontaneously Simon sends an email from a Gmail account with a fake name, and a friendship commences. He is Jacques. The other boy is Blue. Because it’s anonymous, they talk about anything and everything. What it’s like being secretly gay at Creekwood High. Family issues. Friend problems. Coming out. Oreo cookies. Then one day, Martin, another student, confronts Simon. Simon forgot to log out of Gmail on the school computer, and Martin has screen grabs of the conversations with Blue and decides to blackmail Simon.

There are a plethora of subplots through this, as with all great books. Well, they do make the characters real. Martin wants Simon to set him up with Abby, but Abby loves Nick (sorry, minor spoiler). They also have their school production of Oliver coming up. Then there’s just being 16, and all that brings with it. Oh, and Drarry fan fiction and all the geek references.

Simon’s reaction to his forced outing was very mature. His classmates are horrible teenagers, and Simon knew who he was and didn’t break or retaliate. I like the support he got from his theater teacher. He even had a couple of advances.

So yeah, Simon vs the Homo Sapiens Agenda is an adorable story. I’m watching the movie adaptation while editing this and just added this part because I feel I’m missing so many of the little parts that make this book fun. I just read this review on GoodReads which lists all the off-the-cuff awesome. I recommend you check it out.

Leah has recently got her own sequel, but I didn’t like her character. I’d prefer to read Blue’s version of this book.

Over to you to read Simon vs The Homo Sapiens Agenda. I’m off to watch the adaptation movie, Love, Simon.

One thought on “The adorable Simon vs the Homo Sapiens Agenda”