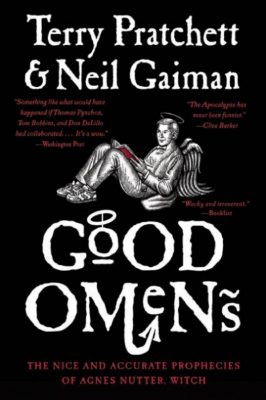 I told a friend I was hesitant to watch the new adaptation of Good Omens because of David Tennant. I knew the book was by Neil Gaiman, who writes amazing and complicated novels, and that David Tennant plays a large role in the adaptation but that’s it. I loved David in Doctor Who, but Secret Smile traumatized me. He plays a very convincing psychopath. (Consider yourself warned)

Laurie decided my fear is unfounded and gifted me a copy of Good Omens as I left Seattle (literally, I just got on the plane and she sent it to my Kindle app). She said, “Read the book, then let’s talk.”

I was still unsure. I stalled reading it because Neil Gaiman’s books are detailed and that didn’t fit with starting school and moving houses and jobs. I didn’t “get” most of American Gods, but LOVED Ocean at the End of the Lane and The Graveyard Book. I should note Good Omens was co-written with Terry Pratchett.

So, I read Good Omens.

It’s not a favorite, but I did enjoy it. Oh, oops. Do you know what it’s about? Where are my manners? My summary to another friend was that it’s the story of the Book of Revelations told as Biblical fan fiction, but in modern-day England. It is telling the end of the world, and how two angels, one fallen from hell and played by David Tennant, are working together to stop it because they like their on-earth lives. Except they lost the Antichrist, who is an 11-year-old boy. The forces of good and evil mass, and the four horsemen come storming into town on Harley Davidsons.

It’s all rather climactic, but I missed the lead up. There are lots of side stories leading to the main part and the story jumps between them, which is probably why it didn’t feel like it was leading to the climactic Saturday. We meet Anathema Device, a witch whose ancestor wrote a jumbled set of prophecies in 1655 describing the apocalypse, and prompted the full name of the book, “Good Omens: The Nice and Accurate Prophecies of Agnes Nutter, Witch”. We also meet the witch catchers, one of whom has probably never knowingly met a witch and the second part of this sentence would be a spoiler. Adam, the antichrist, has the typical neighborhood bike-riding, 11-year-old friends. Not even Adam realizes who he is.

If you’re worried about two authors creating a disjointed story, I couldn’t tell who wrote what. That’s impressive considered they wrote it pre-internet sending disks in the mail and discussing points over the phone.

I’m editing this review while downloading Amazon’s new adaptation. I didn’t imagine David Tennant for Crowley, but I’m looking forward to the Four Horsemen, or more so their adoring fans. I’m reading some GoodReads reviews to save re-looking up character names and someone has pointed out how British the story is, so let’s see how Amazon Studios deals with that. They are usually pretty good with localizations.

Read it, watch it, let me know what you thought.

Update: I LOVE the new adaptation of Good Omens. Even more than I liked the book. The flirtatious angels were adorable. The Four Horsemen’s fans were cut, but I didn’t notice until after. David Tennant plays a distraught, heart broken demon as well as he plays a creepy sociopath. I think I’ll watch it again.