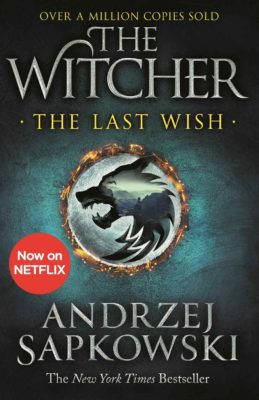 I’ve discovered The Witcher series by Andrzej Sapkwski in a mixed up order. The Last Wish (the first book) was first published in English in 2007, along with the game. Then, Netflix launched the television adaptation just over a year ago in December 2019.

Yep, this book fan started with the television series. Oops.

I’m actually glad I did. While I enjoyed The Last Wish, if I read it before watching the series, I probably wouldn’t watch the series. In this case, the adaptation is better than the book. However, comparing them will come in a future blog post—after I’ve read another book and played the game. This one is just talking about The Last Wish.

For those who don’t know, The Witcher series is about Geralt, the Witcher. In the book’s fantasy medieval time a Witcher was born human and “mutated” with magic and science then trained to fight monsters for payment. Oh, and the books tell there’s a kind of genetic bit too. Geralt travels the lands with half the people terrified that he, too, is a monster and envious of his strength.

This first book is a few of his encounters with a few strands enticing you to the next book in the series. I can see how the Netflix team saw the story’s potential and made some tweaks. In the book, some adventures closely copy fairy tales. But fairy tales with a lot more sex than the Brothers Grimm wrote about. None of it is gratuitous, but it’s definitely there. We open with Geralt being seduced by a priestess (it’s all hetero-normative so far) and we meet the bard in the second half and learn he’s often chased out of town after a romantic twist with the wrong woman.

Two caveats to add. First, the story isn’t linear and it can be hard to see what’s where. That could be confused by watching the television series first, which merges books and points of view, but there’re seconds of Geralt discussing a past event, then we get the story of that event. Second, and this could be the translation, but the depiction of females is a tad… well… male oriented. Yennifer is an incredibly powerful sorcerer and yes, her dress tore battling a djinn but we didn’t need to know it exposed her “shapely breast”.

I haven’t ordered the next book yet, and I didn’t mind The Last Wish. It’s just a rare situation where I prefer the television series to the book.

Photo by Artem Sapegin on Unsplash