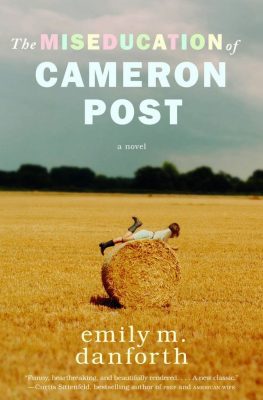 Be warned. This book review is ranty. Everyone has a line marking too far. The Miseducation of Cameron Post by Emily M Danforth is about my line.

Let’s just acknowledge that gay conversion therapy is torture. We no longer tie left-hands behind backs, so why tell gay people they’re an abomination to “cure” them?

The Miseducation of Cameron Post doesn’t get ranty about conversion therapy, so I did. It doesn’t get ranty because this is Cameron Post’s story and she doesn’t know it’s torture. She feels it’s wrong, but when you grow up in country Montana where it’s Adam and Eve, not Adam and Steve, and which church do you attend, versus do you attend church, she knows she’s wrong.

“Do you think we’d get in trouble if anyone found out?”
“Yeah,” I said right away, because even thought no one had ever told me, specifically, not to kiss a girl before, nobody had to.
It was guys and girls who kissed – in our grade, on TV, in the movies, in the world; and that’s how it worked: guys and girls.
Anything else was something weird.”

The novel starts when Cameron is 12 years old and doing normal 12-year-old things: swimming in the lake, sleepovers, stealing gum from the corner store, first crush. Cameron’s first crush and kiss is with her best friend, Irene. They know it’s wrong, but it’s right for them. While at a sleepover at Irene’s house, Cameron’s grandmother calls; Cameron’s parents have died in a car accident.

Grandma moves in to care for Cameron, along with her born-again Christian aunt, Ruth. They change churches to one Ruth feels is more suitable, and Cameron hides her shame in having “caused” her parents’ deaths by kissing a girl.

Time goes on; Cameron grows older. She makes friends with the bad kids, secretly smokes weed, drinks beer, and swims competitively. She doesn’t have boyfriends but has close female friends. Rumors swirl, but there’s no proof, so Cameron’s lesbianism is barely gossip. Then she meets Coley Taylor, the perfectly gorgeous, sweet poster-child for Miles City, Montana. Coley even has the perfect boyfriend.

Cutting it short, Cameron falls in love. And during a summer while her boyfriend’s away, Coley falls in lust. They are found out and Cameron is sent away to gay conversion school. Cameron is confused how what she feels and who she is can be so wrong. She meets girls from other places who say it’s not, but in Miles City it is. She is.

Her new school isn’t as dangerous as conversion camps I’ve heard about. Maybe because this is Cameron’s story, and Cameron believes in herself more than she believes in Reverend Rick, who runs the school. Their efforts to shame Cameron don’t work because she knows it’s false. We see another character do self-harm to “try and fix himself”, but not Cameron. Her friends know it’s false too. That there’s no cure for being gay. I loved this interaction:

“Really?” Adam said. “Nobody’s ever passed the program or whatever? Gotten ex-gay enough to go back to a normal high school?”
“Well, it’s only been open three years,” Jane said. “But nobody’s done it that I know of.”
“Because it can’t be done,” I said.

The Miseducation of Cameron Post is an excellently told story of a girl growing up in a rural town. It’s the standard coming-of-age novel. It’s not trying to prove a point, just tell a story. And in being so blazé and matter-of-fact, it does prove a point. The point that as long as they’re a good person, it doesn’t matter who you love. It’s natural, and no praying, treatments, or therapy can or should change that.

I’m giving away my copy of The Miseducation of Cameron Post by Emily M Danforth. Enter with the box below. It is a used copy, purchased also used. It’s in great condition, but not immaculate. And I’m sorry. It’s only the US and Canada; postage is expensive.