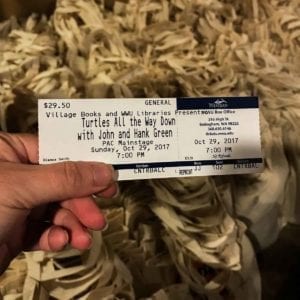 There are affiliate links in this post. If you make a purchase, I make a few cents—thank you—, if you don’t or buy elsewhere, I hope you enjoy the book.

Some people get excited by their favorite band performing. I prefer book tours. But then again, these aren’t the stodgy read from books while sipping tea tours. John Green’s last two tours, at least, have involved rock music, incredibly random Q and As, and a lot of talk of science. Oh, and some reading from his books.

Last Sunday was the Bellingham stop in the Turtles All The Way Down tour. Weirdly enough, the tour show contained more turtles than the book does. More on that later. 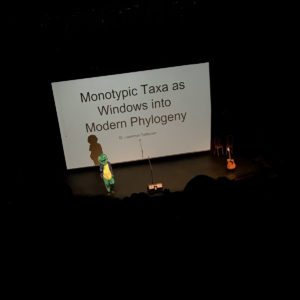 No, actually, let’s discuss Dr. Lawrence Turtleman now. I knew about Dr. Turtleman before the show, but it didn’t make it any less funny. If anything, that contributed to the tears of laughter. As John said as he came back on stage, that segment gets funnier each stop of the tour. Several minutes into Dr. Turtleman’s lecture on monotypic taxa, he (Dr. Turtleman, not Hank Green — definitely not the same being) pointed out that there was no pun or joke to the lecture. It was just science lecture. Yep. Just science presented by a guy dressed as a turtle. That actually sounds really weird, but hopefully, Dr. Turtleman gets his own SciShow episode, and you’ll see how informative AND entertaining he is. I can’t pronounce most of the words and struggle to define them, but I learned more in that five minutes than years of science in high school.

Back to the turtle-less Turtles All the Way Down. John Green has a new book out. It was actually released near a month ago. If you haven’t read it, please do. As usual, John’s very real in his stories. Aza (the main character) suffers from anxiety. John shared his experiences also with anxiety and mental illness through the show. It made for an unusual up and down show. Some serious discussions about mental health, some music from Hank, a somber remembrance of author Amy Krauss Rosenthal giving a haunting rendition of “We’re here because we’re here” to Auld Lang Syne that had me in tears. Back to the up: a live Dear Hank and John. Their podcast is funny, in person is even funnier. Hank trying not to totally lose it laughing at John is show-worthy in itself. I can honestly say I had tears all through. Some sad, lots of laughter tears. 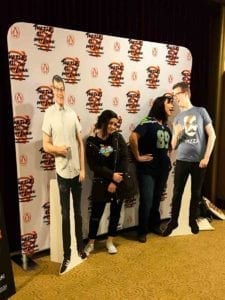 Because I can’t seem to not look at it from a marketing perspective, it was interesting to see how the tours changed in the last four years and with the movie adaptations of two of John’s books. The only Washington show was in Bellingham, not Seattle. It was also one of the first to sell out of all 1,100 tickets. That’s about 5% of Bellingham’s population. The scope also meant no meet and greet, which avoids the hours-long waits from The Fault in Our Stars four years ago. They had a photo booth with Hank and John standees instead. No one seemed disappointed. We also scored more swag this time. The signed books came with a Turtles All The Way Down tote bag, poster, and program. Remember this is a BOOK tour. Sure Turtles All The Way Down hit the bestseller lists before it had a release date, but this was big budget.

The tour has now ended, and they generously live-streamed the final show from Los Angeles. Thank you to these two men for taking a month to spend with their fans. We appreciate it.