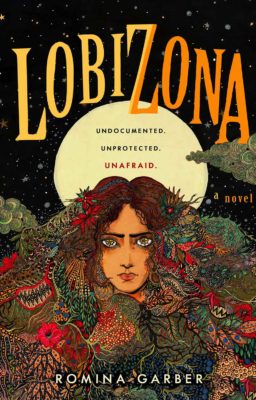 I know I’ve been quiet and my reading has fallen behind but when I was invited to join the Lobizona blog tour it was an easy, loud YES! Sure school has been busy and Melbourne now has pandemic curfews mushing my brain, but the story of an undocumented Latina in Miami needed to be shared.

Lobizona by Romina Garber exceeded my expectations. Blew them out of existence level exceeded my expectations. The story started as I expected. Manu grew up sequestered in a Miami apartment, along with her mother and an elderly friend. She thought she was homeschooled and barely allowed outside because her and her mother are undocumented. Her mother smuggled Manu to Miami as a child, hiding her from her father’s criminal family in Argentina. Oh, that and Manu’s eyes with irises as yellow as the sun and silver star pupils.

This is where I’m stopping the summary. I totally missed the fantasy element in the synopsis and not knowing what was coming made Lobizona brilliant for me. I’ve already told you more than I knew, even though Spanish-speakers will know more from the book’s title.

I’m not sure how to classify Lobizona. It’s definitely fantasy but that’s not what pulled me in. The summary I gave you is in the first few chapters and later so much is proven wrong (and some right), and fairytales are true. Especially the legend of the werewolf. This novel is full of twists and turns, emotion, friendship and action. I suppose what grabbed me most was that it feels original. There are so many stories of persecution of who a person is that, unfortunately, are played out in real life. I don’t know if it was Manu being “wrong” in both her worlds that made it new, or the Argentine culture and mythology that made it original for me. Whatever it was, it makes Lobizona an excellent and highly recommended read.

Thank you to Meghan at Wednesday Books for inviting me on the tour.