I received this book for free from Bookish First, First to Read in exchange for an honest review. If you've read my other reviews, you'll know that if it's bad, I'll say so, regardless of how I received the book. 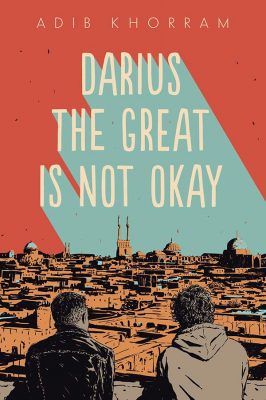 I just finished reading Darius the Great is Not Okay by Adib Khorram. It’s the story of Darius who was born and grew up in Portland, Oregon to a blond American father and Persian mother. He’s a geek and knows more of Lord of the Rings than Darius the Great, who he’s named for. He’s the outsider who doesn’t fit in, even in his own family. His little sister speaks Farsi and Skypes with family in Iran. Darius feels he’s a disappointment.

Most of the book is Darius’ trip to Iran. His dying grandfather wants to meet his American grandchildren, whom he’s only conversed with via Skype.

There are all the usual aspects of a YA novel. The discovering yourself, the learning that the world is greater than themselves. I loved watching Darius make his first real friend.

However, there were other things I learned while reading Darius the Great is Not Okay.

I learned that many Farsi words from French. Merci still means thank you.

I learned familial titles go both ways. Babou is grandfather and grandson. It may be granddaughter too, which would be awesome to remove an unnecessarily gendered term, but it’s Darius’ story, and the language flows naturally from his perspective.

I learned falafels aren’t Persian. I’m not sure I thought they were, but I’ve never wondered of their origins.

I learned Iran is just as varied with both religious and economic diversity, like most countries.

I learned that selective ignorance and bigotry is everywhere in all cultures. OK, I didn’t just learn that, but I loved the different levels of acceptance Darius’ family had to non-Persians.

I learned Iran’s history is deeper, more complex, and more proud than I could have imagined.

I learned (this one is more inferred) that being gay in Iran isn’t bad. This has come more from Darius and his friend Sohrab’s friendship. Their relationship isn’t romantic, but the physical and verbal affection is more than most men have. It feels like flirting, and Darius’ father hints towards it. But Darius doesn’t acknowledge it, and I like that. It feels more normal.

Finally, I learned more about Star Trek, but not enough to make me want to watch it. I’m much more Laleh than Darius with that.