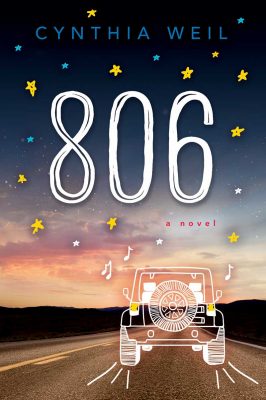 The ludicrous hilarity of Twilight with the teen amazingness of John Green.

It was the John Green-esque road trip that caught my eye in 806 by Cynthia Weil. Three teens are going on a road trip to discover their sperm donor father. I was expecting thoughtful characters and some teen soppiness, and overall a story that would make me think. Instead, I laughed, and I laughed. 806 is like a talented writer tried writing a bad story. Possibly as a group with a bottle of wine involved. The writing is excellent; the story is hilarious. Apologies to the neighbors I may have woken with laughter (darn, thin apartment walls.)

The story: Katie, currently calling herself KT, grew up with her single mom and a steady stream of her mom’s boyfriends. Her mom says she’s just trying to find KT a dad. But, KT says she has one. She’s had photos of her parents together since she was small. He just left them, but he exists. After the latest boyfriend break-up, KT’s mom tells her where to find her father. Surprise, he’s local. Another surprise, he’s not her father. His grandfather promised him an inheritance if he had a child, so they used a sperm donor. Smart grandpa ordered a DNA test. KT was born, and her “dad” left penniless.

Condensing the story, KT’s mom gave her the donor number, 806, and the search for her father began. She discovered her school’s champion swimmer and the champion dweeb are her half-brothers. They, in an unrealistically short time, follow some dead leads, sneak into the sperm bank to steal records, leave on the road trip, have their car stolen, find it at a bikini carwash, drive to Arizona on another false lead, and end up in California. Of course, there are more adventures along the way. It is a road trip, of course. A hot waitress flirts with the dweeb half-brother to hitch a ride, then takes off with their ill-gotten casino winnings. The psychic sperm donor predicted their arrival in Arizona, enlightened the swimmer, and sent them on their way. Oh, that sounds wrong. 806 is very PG. Much more PG than you’d imagine a sperm bank break-in could be.

When reading 806, you must remove reality from any expectations. Every single storyline gets tied in a sparkly ribbon bow. EVERY SINGLE ONE. The half-siblings learn to appreciate their home situations, broken romances are revived, and people become stronger for it. It’s more happily ever after than a Disney fairytale.

However, there’s one happily ever after I must spoil. Back to the Twilight similarities, it’s pulling on the dangerous part. Even the sitting outside the bedroom window while she sleeps part. Dylan is in KT’s band. He obviously has a crush on her, but it’s not bad at first. Then he stalks her window. THEN he follows their road trip, showing up everywhere KT is. Even the unplanned stops. He’s declaring his love for KT; she’s telling him to go home. I can kind of accept that because she does rebuff him, but in the final let’s-wrap-it-all-up moment they hook up. Katie (she’s she’s back to by then) falls for him, and it’s love. Except that’s not love, it’s Stockholm syndrome. Dylan being rewarded for stalking is the only bad part of 806.

Ignoring that part (and it’s not that big), you’ll laugh through 806. It’s the best-written trash I’ve read in a long time.

* I “borrowed” the book’s tagline for the post title. It’s a good tagline.